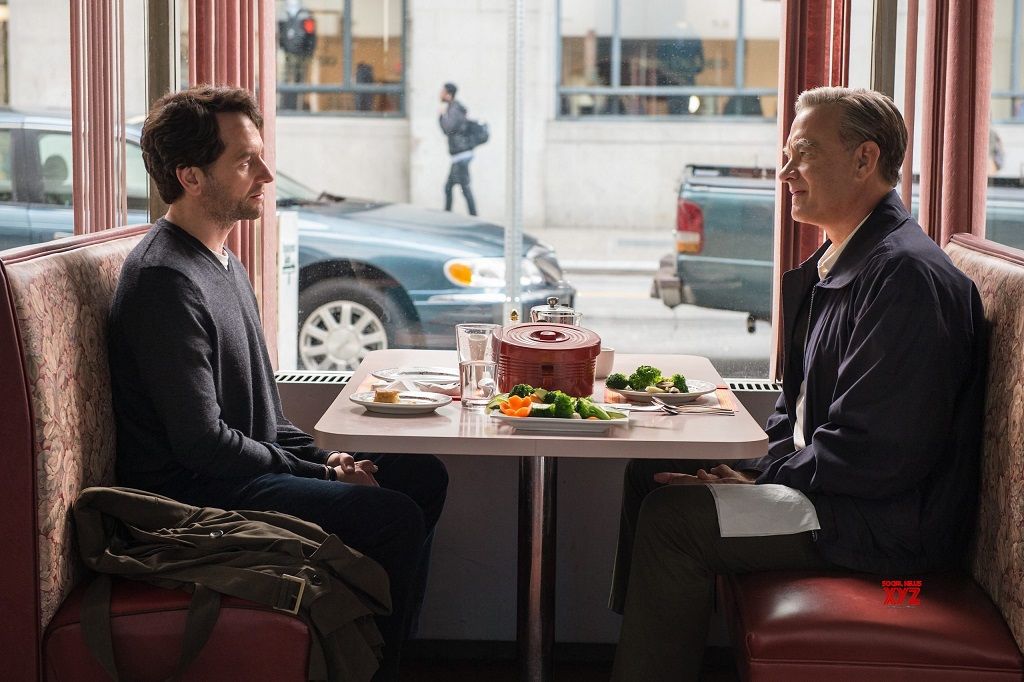 For people in the UK there might be an issue with a film about Fred Rogers: we didn’t grow up with him. In the US, Fred Rogers’ pre-school TV series Mister Rogers’ Neighbourhood ran from 1968 until 2001 and even since his death in 2003 from stomach cancer has served as a tool for comfort in times of trouble. In the UK aside from pop-culture references and those who saw 2018 documentary Won’t You Be My Neighbour, the story of who Fred Rogers was might remain elusive.

Based, albeit loosely, on the true story of Tom Junod who in 1998 profiled tv personality (and Presbyterian minister) Fred Rogers for Esquire, and in the process of writing his article “can you say… hero?” had his life changed. In the film the role of Junod is changed to that of fictional Lloyd Vogel and bares no resemblance, except in that he is writing a piece for Esquire, and he meets the legend.

Marielle Heller coming off the back of acclaim and awards nominations for her cast in Can You Ever Forgive Me? is back in the true story form, though here she is attempting something radical in this world – to bring some good to it.

Who Fred Rogers is remains something of a miracle, a slight unassuming man with a soft voice who taught kids that feelings matter and that it’s natural. His legendary show that ran for 31 seasons, covered topics like divorce, death, war and illness, but did so with a song, puppets and the radical notion that being good will change the world. Rogers’ show was notable for an episode in which Rogers invited his neighbourhood police officer (an African American) to sit and soak his feet in his pool with him, helping to show that race is only skin deep and we have more in common than we have differences.

Read next:
The Post review - a triumph of message and performance

It’s a stroke of genius on Heller’s part to then cast Tom Hanks as this incredible human being. Having previously played gruff Ben Bradlee and stoic Sully Sullenberger, here shows that he is the master of a kind soul and really who else could play the role.

The choice to fictionalise the character of the reporter for Matthew Rhys makes more sense than not because it allows the film to add issues to the character that the real figure might not have had. Here Vogel is a new father, dedicated to his work and known for digging into the murk of a person when he investigates, and is trying to mend his relationship with father, though reluctantly.

Rhys turns this role into more than a character cypher and manages to bring him to life, his weary tired face pulls us into the story, and modulates between disbelief and barely suppressed anger at the world. Yes, it’s the story of someone seeing the better side of themself, but the film has the message that anger might be natural but holding onto it isn’t.

Heller also makes the wise choice to frame the story as if it were an episode of Mister Rogers, with him addressing the audience and talking of his friend Lloyd, and when the exterior shots happen they are done in the miniature animation style that the show was known for, again, this means the fiction isn’t against the film but part of Rogers’ lesson.

Screenwriters Micah Fitzerman-Blue and Noah Harpster make the wise choice to not make the protagonist Rogers, but in a way frame him as Vogel’s antagonist. Trying to interview Rogers was famously a hard task as his interest was in befriending his interviewer and the near relentless niceness is something that is never viewed with cynicism. Hanks manages to turn Rogers into a real person, not just a holier than though figure but someone who despite being a gentle figure, works hard to be better, but knows he is a fallible as any human being.

Read next:
The Circle review - a lot of potential, wasted in a bid to be something with universal appeal

The film, when it does address the message, that holding onto anger is a prison to ourselves, does so with a generosity of spirit. Rogers’ had no interest in being dark or mean spirited and nor does the film. Scene after scene shows this, his thanking of Vogel’s wife Andrea (sensitively played by Susan Kelechi Watson) for sparing her husband to him so he can talk with Rogers, or his reliance on faith above all things.

There are hints that there’s a darkness there, Vogel pointedly asks about how hard it must have been to be raised by Mister Rogers, and his answer is balanced but by turns admits he has failed in his own mind. But perhaps in the form of Chris Cooper we get the clearest message of all: we get angry when we love, and when we love we must learn to forgive. This all sounds incredibly heavy but the film, like the man it looks at, is very light in places.

There are things to laugh at, not least moments where the legends of Rogers are brought to him: one involving someone asking if the rumours of him being a Vietnam Vet are true – they are not. One can only assume had Rogers gone to Vietnam he’d have still adorned the red cardigan and offered to talk to the Vietcong about how they feel and compliment them on their nice hats – he might have actually ended the war quickly.

Perhaps a perfect example of the film’s generosity of spirit is when Vogel and Rogers are on the subway, and a group of teens sing his theme song, before long the entire carriage is singing it to him, as Rogers beams from ear-to-ear. His legacy cemented, or as Vogel’s own wife warns him early on “don’t ruin my childhood”.

Read next:
The Circle review - a lot of potential, wasted in a bid to be something with universal appeal

For us in the UK the concept of Rogers being a good man might be a hard pill to swallow and in a way the timing of this is fortunate, since so many of our own childhood entertainers have turned out to be nothing more than child abusing scam artists concerned with power, sexual gratification and lies. Here, we meet a man who practises what he preaches, he tries to see the good, and tries to inspire his own aggressive form of kindness.

In the age of pussy grabbing, water melon smiles and media anger at a black woman marrying a prince the film we all need isn’t just a feel good film – which this film definitely is – but a feel better film. Or in the most basic terms, it’s a beautiful day in the cinema, where we’re all welcome to be his neighbour. We can only assume after this Hanks will have to play Jesus to play someone better than Rogers.

The Post review – a triumph of message and performance

The Circle review – a lot of potential, wasted in a bid to be something with universal appeal