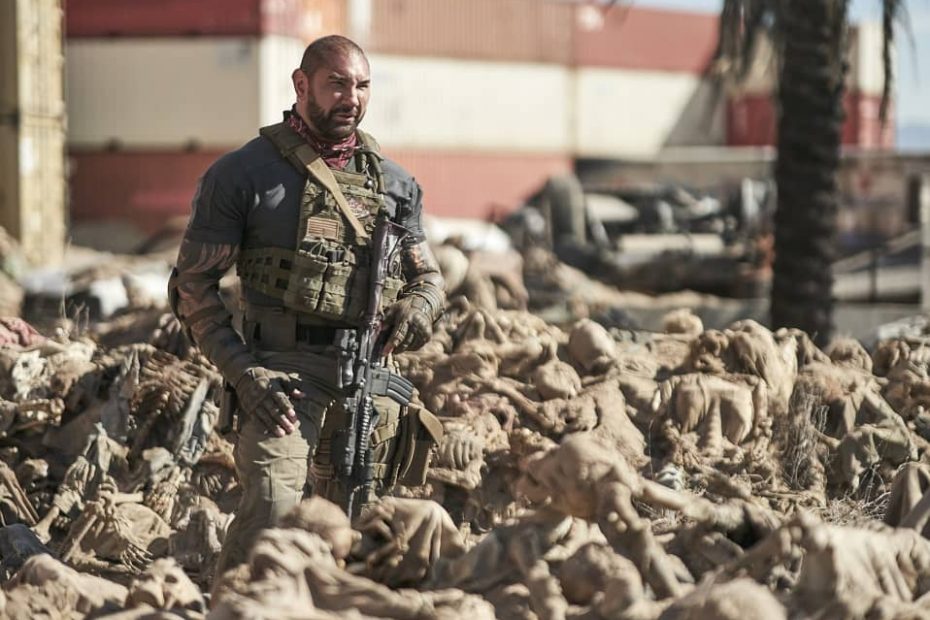 Having just finished his mighty superhero opus you’d imagine that Zack Snyder would want to take some time off from the world of action and filmmaking, maybe take a vacation, catch up on some TV, see what The Last of Us Part II is all about – but no, sadly a pandemic scuppered the vacation plans and the promise of total freedom thanks to Netflix’s policy of giving bags of cash to filmmakers to do what they want must have appealed to Snyder who has had a career fighting with the Warner Bros. brass about his movies – all his films bar his debut Dawn of the Dead have been made at WB.

Army of the Dead follows a group of mercenaries lead by Scott Ward who travel into the zombie-infested but walled off Las Vegas to pull off a heist for a mysterious billionaire, but the US government is planning to nuke the area and the zombies aren’t as dumb as they first believed.

Army of the Dead is something of an oddity in the filmography of Snyder, it, along with 2011’s Sucker Punch are his only original movies. Though to call it original would be to ignore how riddled with cliche the film is.

For starters the characters are all thumbnail sketches, Dave Bautista’s Scott is a hulking badass with daughter troubles. His daughter Ella Purnell is a volunteer for those displaced by the zombies who wants a cut of the money to help those downtrodden. There’s the guy with demons, the funny guy, the company man, the quiet badass, the cool Latino, the cool Latino that is a woman and so on. 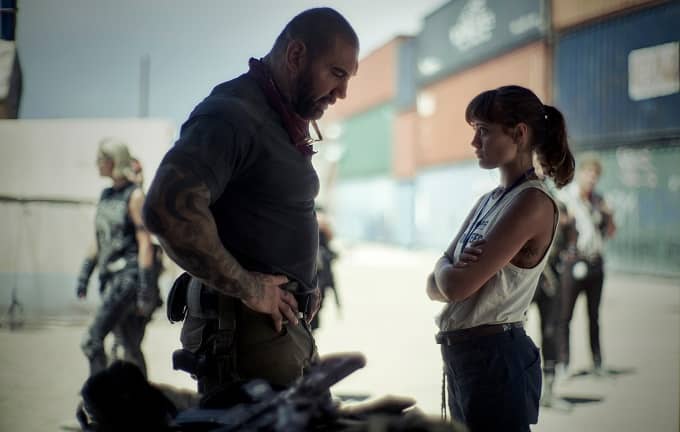 Dave Bautista and Ella Purnell in Army of the Dead.

It’s an issue that there are also too many people, probably because we need humans to feed to the zombies, but  given enough freedom to make a slow film Snyder takes painfully long to set every character up. And pace is an issue too. The film starts off sharply enough with a cool pre-credit sequence, but even the opening credits which start out carnage-filled and fun end up somber and about a minute too long – by the time the cover of Viva las Vegas ends the joke has worn out.

The film takes a while to get to the undead, and the zombie mayhem happens in fits and starts. Considering Snyder is a dab hand at action, the action here is standard sub-The Walking Dead gore and the occasional funny moment of splatter – but even that is done with a po-face.

The use of two types of zombies – fast and slow is not new, nor the idea of intelligent zombies. George A. Romero was doing that as far back as Day of the Dead in the 80s, and really honed in with 2005’s Land of the Dead. It’s hard to watch the film and not wish Romero were alive for Netflix or Shudder to offer him a bucket load of money to make his zombie opus.

It’s not all bad though, the sight of a zombie tiger is something to behold – Garret Dillahunt’s incredulous delivery of “that’s crossing a line” is a highlight, and some of the zombie splatter is done with an “ew nasty… so awesome” vibe.

Bautista and Purnell do well with the tired estranged father-daughter dynamic, and perhaps because the emotional scenes mean more to Snyder in the wake of his daughter’s tragic death, they slow the whole film down to a halt. There’s nice chemistry and rapport between Omari Hardwick as philosophising badass Vanderohe and Matthias Schweighofer’s safecracker Dieter that manages to keep you laughing all the way through.

The concept of the ‘alpha zombies’ never really goes anywhere, neither is it explained what makes an alpha and what makes the shambler zombies, though the sight of alpha zombie Zeus astride a zombie horse is pretty cool.

There are beats that feel political, displacing people from their homes, the abuse of power in these camps, the US government destroying something with force rather than solve the issue but that’s about it. But, Snyder is nearly as politically savvy as he would need to be to make any of that work or hold weight, instead it just pads the runtime.

It should be noted that Tig Notaro’s Peters was originally played by Chris D’Elia but after misconduct allegations he was replaced in post-production and CG employed to put her in his place – it sometimes shows but generally doesn’t – though it makes including Amber Heard in Justice League reshoots all the more problematic.

As with all Snyder films, there’s way too much slow-motion, often for things that don’t warrant it, and the use of the Cranberries’ Zombie feels out of place considering it’s a protest song, not just a slow sad song with the word zombie in it to look cool.

Snyder’s zombie epic is at times thrilling, and at other times annoyingly slow, showing the best and worst of what he can do as a filmmaker. Clearly, without restrictions, he can let loose and do as he pleases, but it also means the film doesn’t always work as perfectly as it should.