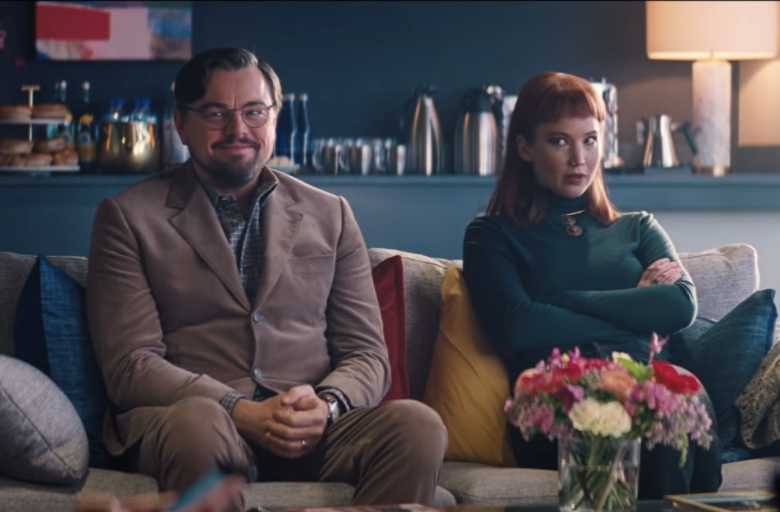 The career trajectory of Adam McKay is quite something. From early Will Ferrell vehicles – Anchorman: The Legend of Ron Burgundy & The Legend Continues, Talledega Nights: The Ballad of Ricky Bobby, Step Brothers and The Nice Guys along with two hilarious shorts involving his baby daughter giving Ferrell a sweaty verbal beat down, to his recent foray into political satire. His first, The Big Short, about the 2008 financial crisis, was a red hot critique of people who got rich as others suffered as a result featuring an ensemble of game players. His follow up satirical biopic Vice followed Christian Bale as former US vice president Dick Cheney and his forging of the ‘War on Terror’.

Now, McKay sets his sights to the skies for a eco-logical tinged political satire. Don’t Look Up follows two astronomers, Dr Randall Mindy (Leonardo DiCaprio) and student Kate Dibiasky (Jennifer Lawrence) who discover a comet heading for Earth which will cause an extinction level event, but the President isn’t convinced causing mass panic and conflicting ideas.

The film is a fascinating thing, like looking at a comet hurtling towards the planet, it’s weird, alien and yet utterly mesmerising. Everything about Don’t Look Up that should work, doesn’t. Everything that shouldn’t work, does. The political satire at it’s heart, an incept president – Meryl Streep about whom more later – who is more concerned with her primaries and a reelection than she is about armageddon doesn’t quite land, nor does Jonah Hill as the chief of staff and the President’s son. The breakfast TV news presenters offering a light-hearted repose to the doom saying in the form of Tyler Perry and Cate Blanchett aren’t a pointed enough to make an impact.

Moreover, the recurring joke about an army general fleecing scientists out of money for free snacks just isn’t funny, yet is referred to four times. Mark Rylance reprising his role from Ready Player One it seems as a Steve Jobs-type with zero human characteristics and scary teeth is not the searing take down of Elon Musk it thinks it is, nor the Ron Perlman army general with outdated views being brushed aside as “of a different generation”. 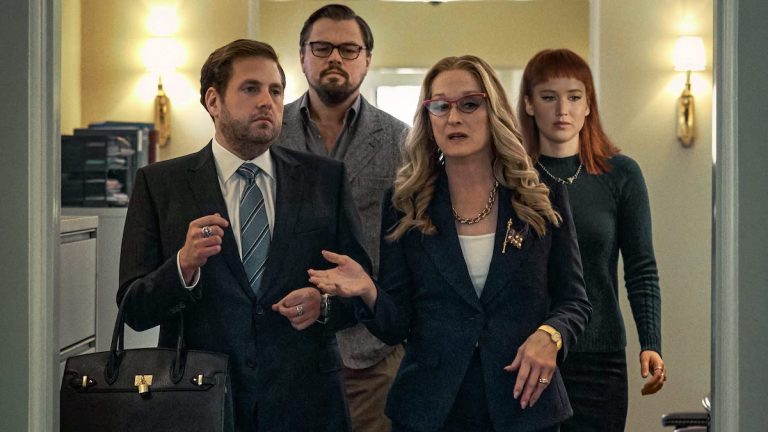 What does work is the smaller stuff, as the comet gets every closer DiCaprio and Lawrence find themselves memed and mocked, as DiCaprio’s profile grows, Lawrence is reduced to stickers and cheap animation online mocking her impassioned pleas. The subplot of DiCaprio’s ego also doesn’t work, it’s not involving to see him get involved with Cate Blanchett’s ruthless TV presenter who is secretly a genius. His best scenes are him trying to explain the situation without having a panic attack, or moments with is wife Melanie Lynskey.

As the film draws to it’s conclusion it finds a more steady pace – DiCaprio reuniting with his family, along with Rob Morgan’s NASA scientist and Lawrence’s budding relationship with secret religious nut and stoner Timothée Chalamet. The nature of their ending, a dinner table as the apocalypse finds it’s way in reminds us that Irwin Allen the master of disaster staged these epics but always kept an eye on the personal and when it’s these two low level types trying to convince people it’s at it’s most compelling.

The film, however, it cut like a series of sketches than an involving narrative, too many inserts of naysayers, deniers and political buffoonery which might have appeared funny around the Bush-era but post Trump just offers a half hearted “yeah, so what?” Nothing is as sharp as Bob Odenkirk as the President in Seth Rogen’s Long Shot.

The film also suffers from a sexist streak. Lawrence is reduced to hysterical, derided as “the shouty lady” and turned into a meme. This could be an interesting comment of the vilification of women in authority if the other women held any substance. Blanchett’s secret genius sex obsessed tv presenter is nothing new, and having the president being a republican woman is dubious at best. It’s clear Streep is getting back to Trump for calling her highly overrated but it just appears like a comment on how women can’t be presidents, and how most women are sluts. Blanchett sleeps around, Streep sends nudes to her colleague, a late in the day admission of infidelity by Lynskey appears to be a “see we all suck” shrug. Even a sweary Ariana Grande as a pop star having issues with her boyfriend Kid Kudi isn’t really much more than a thinly veiled dig at celeb culture, and despite the joy of seeing Grande call DiCaprio an “old fuck” there isn’t much more to her role.

The recurring joke that DiCaprio gets known as the “hot scientist” also goes against the idea that both are low level nobodies that you wouldn’t look twice at. This calls to mind the fact that beautiful women can’t resist Will Ferrell in The Nice Guys a joke that works perhaps for a sketch but when stretched out doesn’t really go anywhere.

By the time the film ends you feel like you’ve not really been shown anything you didn’t already know. Like a lesser episode of Black Mirror but without the dark wit that Brooker brings, it’s interesting to an extent and doesn’t entirely cop out but each joke goes on for too long, a song about everyone dying stops being funny after a verse but we hear all of it, a long speech that needs to end keeps going, recurring unfunny gags that really strip away what does work – the story of two people trying to convince the world to look up and see the incoming danger.

McKay might have his sights set to big heights but in doing so he trips over his own feet. 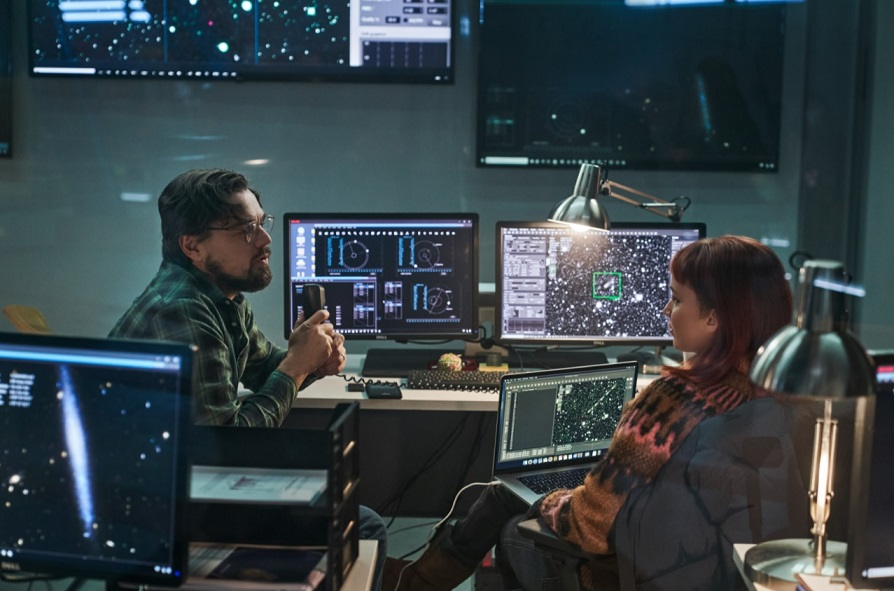 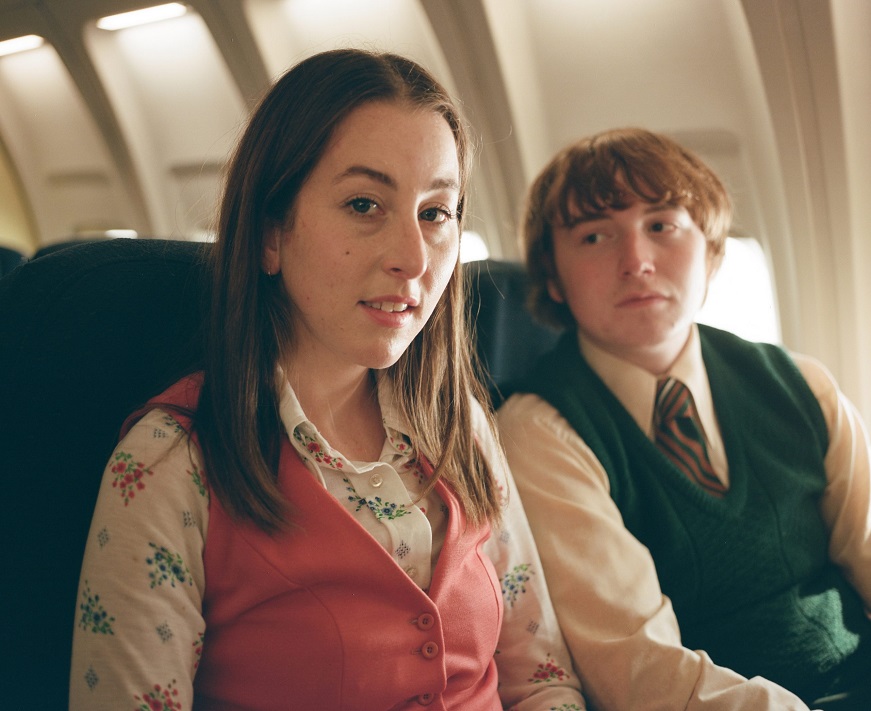 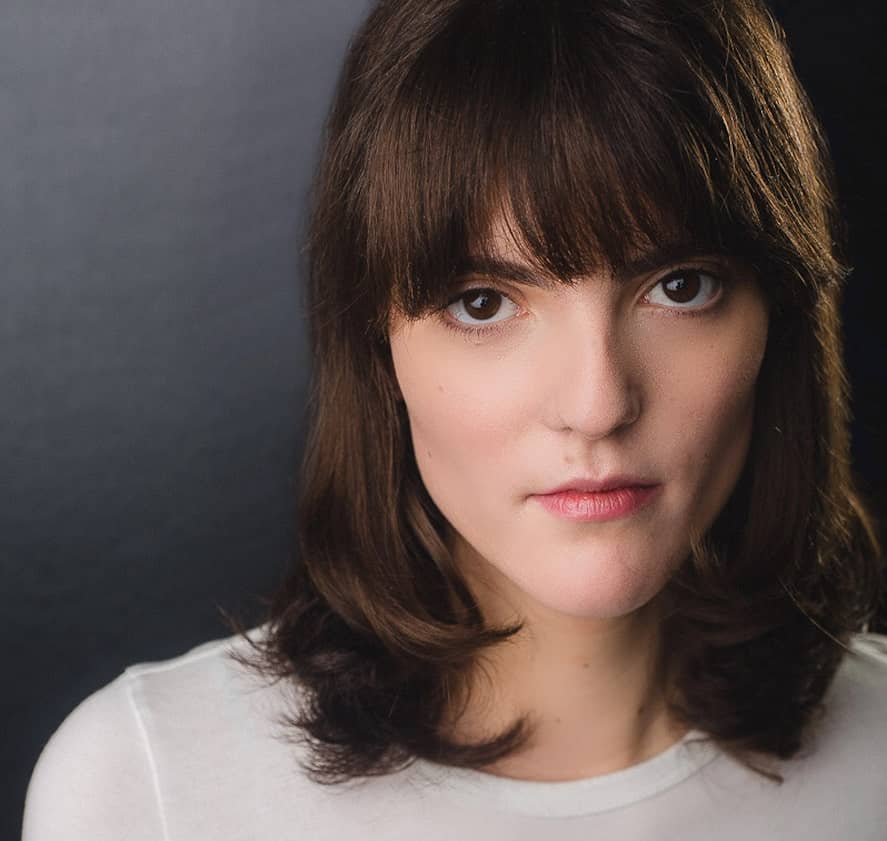