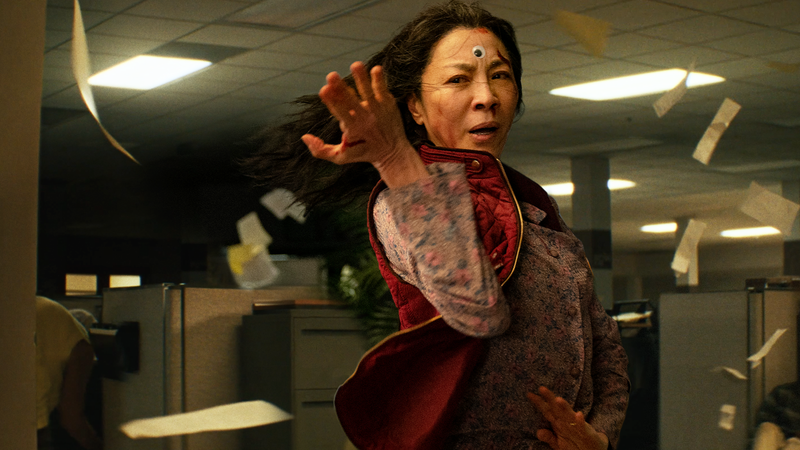 Multiverses are the ‘in thing’ at the moment. Everyone’s got one, from Marvel offering multiverse galore with Loki, WandaVision, and Doctor Strange in the Multiverse of Madness to DC’s multiverse blockbuster The Flash on the horizon. Perhaps most interesting, though, is this Russo brothers produced indie.

Everything Everywhere All At Once follows Evelyn Wang, a laundromat owner facing foreclosure. Her lesbian daughter wants to introduce her girlfriend to Evelyn’s father, and her husband Waymond is on the verge of leaving her. Suddenly, an alternate version of her husband enters her life and warns her of a being of pure energy and power that is killing every Evelyn from every possible universe, and she must hop from world to world to stop her.

If the plot sounds too bonkers for anyone to come up with, then you didn’t see Dan Kwan and Daniel Scheinert’s previous feature Swiss Army Man. You know, the one where Daniel Radcliffe is the farting corpse that Paul Dano rides? Yep, that one. This is a deceptively simple tale of a woman who thinks she’s owed more in her life and is dissatisfied, who learns that actually, those failures have made her more important than she could possibly imagine.

Michelle Yeoh, therefore, is perfectly suited, having made a career of both action roles and thoughtful character pieces. Here she melds her Crouching Tiger, Hidden Dragon badassery with her The Lady soulfulness, the stern authority of Crazy Rich Asians with the go-for-broke fun of Tomorrow Never Dies. This is the juiciest role Yeoh has had since she played Aung San Suu Kyi in the Luc Besson biopic, but this is a much better film. 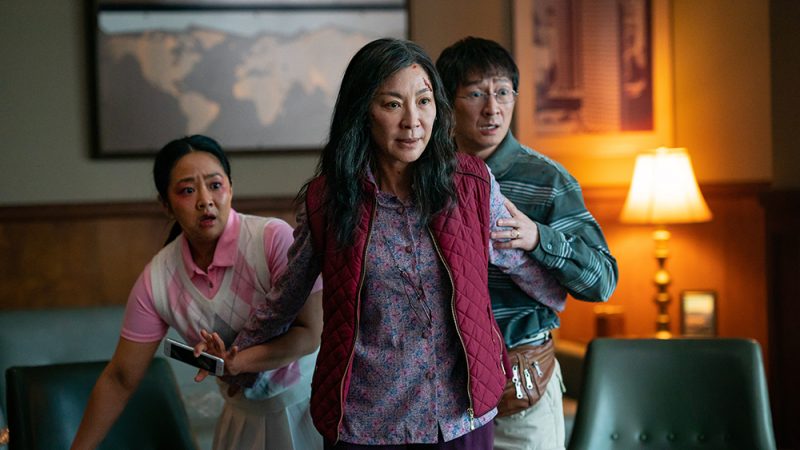 Michelle Yeoh, Ke Huy Quan and Stephanie Hsu in Everything Everywhere All at Once.

The film clearly loves the ‘80s, an era where high concepts were melded with weird comedy and genre mash-up movies to pure delight. The Daniels, as they are collectively known, knowingly cast 80s standard Ke Huy Quan as Yeoh’s kind-natured husband Waymond. Quan flits between a dopey, soft husband to the kind of stone-cold kicker of asses that Jackie Chan made his name in. One scene in which he takes out four guards with nothing but a bum-bag and a smirk is one of the best action sequences of the year – and it’ll be hard to top.

Around those two are a fine supporting cast. Stephanie Hsu brings soul to the role of Joy, the Wang’s daughter who might also have a connection to the ever-growing threat, while industry veteran James Hong riffs on roles in things like Big Trouble in Little China flitting between a doddering old man and a stern authority figure. Perhaps the most fun is Jamie Lee Curtis’ supporting performance as an IRS agent of chaos and catalyst for introspection.

The film is, to start with, knowingly confusing. It has great fun with its confusing slapstick action and weird changes in dimensions. The aspect ratio changes, we have faux endings and absurdism thrown in. But as the film progresses, the Daniels begin to examine what a multiverse really means — if there are infinite versions based on endless choices what’s the point of this life? What does it mean to consciously be kind to one another? To love without shame? To see the best in what you have?

It’s going to be a litmus test for people — those who do and those who don’t — with many unable to digest its very singular brand of science fiction mash-up. But those who drink deeply will be rewarded with the year’s weirdest and most emotionally satisfying sci-fi comedy-drama action existential exploration.

Put that on the poster.