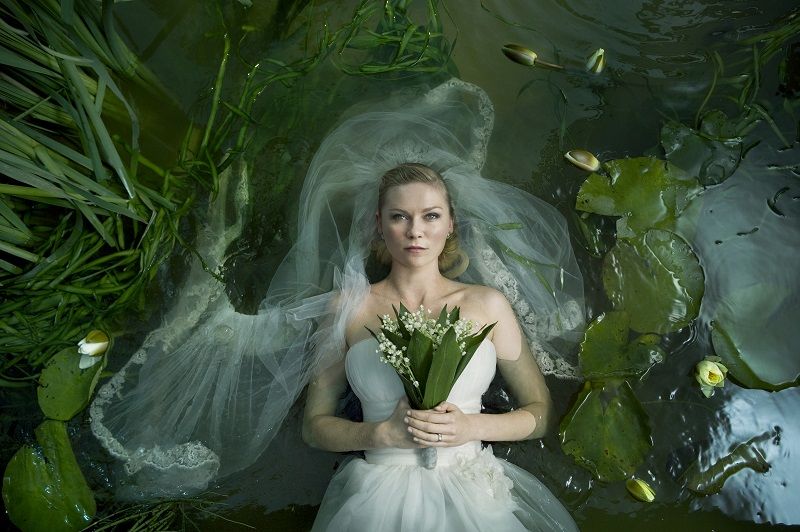 We at No Majesty would like to present some of our favourite films that highlight various mental health issues. These are the films that show you are not alone, you are loved and there is help out there.

Girl, Interrupted is generally considered to be more realistic than the masculine One Flew Over the Cuckoo’s Nest, perhaps because it’s based on a memoir. Winona Ryder stars as Susanna Kaysen, a woman who suffers a nervous breakdown and struggles with substance abuse. While in a hospital, she encounters people with a pathological need to lie, someone with self-harming tendencies along with obsessive-compulsive disorder, and Lisa, as played by Angelina Jolie in Oscar-winning form, a woman who is a sociopath. The film is frank and is a very interesting look at the way in which mental illness in women is treated.

Apocalyptic drama doesn’t get this arty or bizarre in Lars von Trier’s Festen meets Deep Impact. At an awkward wedding, Bride to be Kirsten Dunst feels her life is worth nothing, as depression cripples her. While the boss and her soon to be husband (Stellan and Alexander Skarsgard) loom over her, her parents talk over the verge of arguing (John Hurt and Charlotte Rampling), her sister Charlotte Gainsbourg expresses fear that the planet Melancholia will collide with Earth despite what her husband Kiefer Sutherland says.

Melancholia is an interesting metaphor for how depression works – as if the whole world is ending, that an unknown force is crushing you, and shows that even on what might be the happiest day of your life, a large planet-like darkness can loom over your whole being.

Perhaps best known for the near-lethal amount of weight Christian Bale lost to play the lead role of Trevor Reznik. Suffering from Insomnia and paranoia, Reznik finds his ability to gain weight compromised, his only stable relationships are with prostitute Jennifer Jason Leigh and single mother Aitana Sanchez-Gijon. To make matters worse, his paranoia, half-sleep ridden state leads to Michael Ironside losing his arm and a sinister man named Ivan (John Sharian) to haunt him at every turn.

Yes, Bale lost more weight than a P.O.W., but really the film is a look at someone unravelling, blurring the lines between real and dream logic. The lack of sleep means he has nothing to rely on for a conscience, and the film shows the toll it takes on a man.

The story of John Nash, a genius who began developing paranoid schizophrenia with delusional episodes. Russell Crowe plays Nash, a man struggling with the ability to see Math in a way few others could, but also the constant fear that three people are around him at all times.

The stand out of the film is actually Jennifer Connelly as Nash’s wife Alicia. Showing just how hard it is to deal with someone who is fighting an illness with no cure. The ending may prove a little heavy-handed, and it leaves out details, but as a haunting depiction of a man convinced there are things going on that aren’t, it’s surprisingly moving.

Read next:
Best foreign language films — ten to get you started

About to be remade (for unknown reasons), Adrian Lyne’s psychological horror film is a showcase for lead actor Tim Robbins as Vietnam vet Jacob Singer, whose experiences before and during the war have left him suffering from flashbacks, and hallucinations.

Elizabeth Pena also stars as the chance for salvation to Jacob, but the film trades on a warped reality where one man’s broken mind could be either Dante’s Inferno or a bad acid trip of the PTSD stricken vets. Perhaps it’s a little too happy to get sexual, and trades in filth more often than art, but the horrors in the film are as psychological as they are physical.

Terry Gilliam’s least Gilliam film is an American drama film from writer Richard LaGravenese. Jeff Bridges plays a radio shock jock who finds himself suicidal and detached from the world after one of his comments spurs a caller to commit a mass murder-suicide. Years later, during his drunken suicide bid he is saved by homeless man (Robin Williams) who’s teaching career ended when his wife was killed in the mass-murder and he suffered a psychotic break. Now believing he is destined to finds the Holy Grail, Bridges follows him in a bid to atone for his mistake.

The film is a perfect tale of guilt, depression and psychotic delusions. Gilliam reigns in his more Python-esque quirks but this is still a Terry Gilliam film, and he coaxes career-best performances from both Bridges and Robin Williams.

It might not be the entire point of the film, but the subplot revolving around Steve Carell’s depressed teacher living with his family after a suicide attempt is actually a very interesting portrayal of mental illness.

In his performance, Carrell plays the role with a reserved misery, not going on about his emotions, not unable to function but reticent. The film shows that a suicidal person can be capable of levity, caring and profundity, but has an underlying hatred for themselves. It’s a deeply moving performance that is all too often overlooked in a film with an accepting nature.

Full disclosure: this is something of a red herring, but it holds emotional resonance for this contributor. This thriller focusses on the discourse between doctors and big company pharmaceutical companies. However, in the story, a depressed Rooney Mara seeks help from doctor Jude Law, and for the first half of the film, there is an understanding in what depression feels like, how it is to be numb to emotions, before the film falls into more sexual thriller territory. Even so, it was enough for this contributor to begin to think about his own mental wellbeing, that and another film which we will talk about later.

Read next:
Time magazine collectively names the ‘silence breakers’ its Person of the Year

It might at first appear as if the film has been picked because of its dependency on retrograde amnesia, but actually, the mental illness it portrays is collective grief and depression. Frank Darabont’s 1940s style melodrama is a Douglas Sirk style story of a Hollywood screenwriter who suffers from memory loss and finds a small town believe him to be a missing war hero.

The collective grief of a town missing the sons they lost to the second world war almost a decade previously is beautifully portrayed. Martin Landau as the father searching for a lost son is perhaps the most affecting story, but note the way in which the town slowly comes to terms with their collective sorrow.

The Soloist is the story of Los Angeles Times journalist Steve Lopez (Robert Downey Jr.) who discovers that former Juilliard prodigy Nathaniel Ayers (Jamie Foxx) has been left homeless due to his schizophrenia which has also left him paranoid his sister is trying to kill him. The story concerns how Lopez, starting out as purely selfish, begins to understand how someone with such talent can fall ill to somethings so few understand.

It might seem trite that music is the salvation of a selfish man and a mentally ill man, but Downey Jr. and Foxx give committed and sympathetic performances that gloss over some of the more brutal elements that schizophrenia can bring about.

Though not specified, Robert De Niro’s Travis Bickle a New York cabbie with delusions of heroic destiny is a dark tale of how mental illness doesn’t always bring about redemption and life affirming lessons. One of the world’s most loved movies, Taxi Driver is Scorsese and writer Paul Schrader craft a dark urban tale of a man undone by his own mind. In Bickle, there is no heroic arc, there is only a man slowly losing his mind and turning into what people fear most. Perhaps he’s imagining it, perhaps he does everything, how are we to know when De Niro and the filmmakers have made a lead who is possibly suffering a psychotic break. A bleak portrayal of the fragile nature of the brain, but also incredibly intense.

Hollywood does love the idea of dementia, as it can be very helpful in plot twists, but here the story of an ageing jewel thief Frank whose family give him a robot to help with his ailing memory is a gentle, funny and often touching science fiction yarn. Frank Langella is Frank, Peter Saarsgard is the voice of Robot, both of whom begin thinking about another heist to keep Frank active and alive, while he attempts to woo local librarian Susan Sarandon. It’s a portrayal of an illness that can strip people of their loved ones, but it’s never bleak, it’s always sympathetic to all people involved, and the small sci-fi conceit allows for a probing look at the world through the eyes of someone, certain they are fine, losing their grip.

Based on the novel by Irvine Welsh, the festive black-comedy-drama-thriller has James McAvoy is mighty fatty nasty form as Bruce “Robbo” Robertson, a bi-polar alcoholic drug-abusing Edinburgh cop who has his sanity stripped away when his wife and daughter leave, his hateful antics catch up to him and he fails to understand the world around him. Baird’s film is hilarious and often heartbreaking with surreal horror put together in a way that once again allowed this particular contributor to come to terms with mental illness. Plus… there’s a musical number with added David Soul, it’s a bit weird.

Eating disorders are hideous things, they’re awful and not entirely well thought of as a sickness. The worst of the illness’ is that people often try to solve the thinner end with “eat a sandwich” and the larger end “man the harpoons”. There are plenty of films about this subject – What’s Eating Gilbert Grape, The Machinist to some extent, but the Netflix produced teen-centric film To the Bone is completely harrowing and moving as Lily Collins completely commits to her performance as Ellen, a anorexic girl trying to fight both sides. Carrie Preston, Lili Taylor and Keanu Reeves give moving turns in the film, but it’s in Collins’ that the heart of the film lies.

NOTE: The American Dad! episode The American Dad Afternoon Special is an incredible episode dealing with anorexia, the plot twist half way through that we saw Stan as he did a fat man instead of dangerously thin is clever and very off putting.

PTSD, trauma and depression all play a part in this moving, and brilliant drama film based on the bestseller. Brie Larson gives a shattering performance at a woman kidnapped as a teenager and forced into surviving and being a mother. Her attempt to hide the darkness of the world from her son, Jacob Tremblay, it’s portrayal of how these things affect everyone is very well done. Not just the pain of a woman snatched from her life and forced to readjust to a life that moved on, but also the work of Joan Allen and William H. Macy who show different sides to the parental role suddenly faced with the life they had taken. It’s incredible moving and brilliant, but very very emotionally draining.

How useful is weed? Experts and users weigh-in on cannabis