2016 was a fantastic year for Grime music; the year this much loved underground sound landed firmly on the main stage.

Veteran Grime artists – the likes of Skepta and Kano and others – released chart smashing albums unapologetically infused with those gritty, nostalgic sounds we remember of grime in its early heydays. In so doing, the scene was spliced with serious new momentum. and a platform the size of which it has never before enjoyed.

Newer school artists, not to be outdone by the scene’s veterans, also played their part in popularising authentic grime music last year. Artists including Stormzy, Novelist, Section Boyz, Dave and Krept & Konan, each helped spread grime’s roots to new ears with chart topping bangers such as; ‘Scary’, ‘#Worst’, ‘NRG’ and ‘Wanna Know’’; boasting big features from American and UK allstars like Drake, Chase & Status as well as R&B legend Jeremih in the process, as well as garnering social media views well into the many millions.

This unlikely music genre, which emerged in the early 2000’s as an ‘off-brand’ byproduct of UK Garage music, was – in the eyes of many –  never supposed to get as big as it is today.

READ NEXT:
Who is CASisDEAD? - The Faceless Face of British Rap

The few artists who rose to acclaim during scenes the early days – the likes of Dizzee Rascal, Wiley, Tinchy Stryder and others – only gained wider success through breaking away from some of those guttural punchline lyrics and looping instrumentals, and instead adopting a more nuanced, pop-driven sound that appealed to a wider market.

This exodus unfortunately left the fledgling Grime scene without many leaders. By 2009, just 6 years since Grime music was born, prospects for the sound becoming a major player in British music seemed all but fantasy.

In spite of all this, however, Grime has enjoyed a true-to-form ‘British comeback’ over the last couple of years. And in 2016, Grime came ‘of age’ in truly undismissable form.

Social media has been instrumental in shoring up the scene’s growing fanbase in the UK and beyond. Platforms like GRM Daily,  SB.TV and others dedicated to showcasing homegrown Grime talent, are spreading out from London through to Birmingham, Manchester, Nottingham and even Dublin; highlighting Grime music’s ability to reach far beyond its early roots and resonate with a wider British audience.

As Kano put it, “you wouldn’t think of Grime in say Derby, but theres grime everywhere – it’s not just in London anymore”.

The rise of established Grime artists to notoriety is even more implausible given that the large majority – Skepta included – of them remain independent; purposely unattached to any of the major labels in music. This impressive feat is a testament to the quality of the music, and is also a fact that has worked to embolden a growing army of talented, up and coming artists across the UK, who actually enjoy a surprisingly sensational online presence and often strong regional stardom in their own respective areas.

With this past years blinding success for artists like Skepta, Kano  Stormzy and the like, as well as the growing assimilation of Grime as part of wider British culture, major industry players are now taking serious notice. Apples Itunes  in March gave Grime its own stand-alone category on the Play Store, the Welsh based Ivor Novello songwriting awards recognised Grime for the first time since 2011, and – alongside dominating this year’s MOBO awards – the scene now even boasts it’s own UK wide awards ceremony for showcasing rising stars; The Rated Awards.

At its essence, Grime’s success has been it’s rebellious authenticity, offering an unapologetic window into the British urban experience, or whatever you’d like to call it. This feature has allowed the scene to remain relevant despite lacking, until recently, a mainstream ear. Now with giants like Skepta, Kano, Wretch 32, Stormzy, Chipmunk, Krept & Konan and many others carrying the mantle for scene once more, and industry leaders finally taking note of the unique talent within this vibrant scene, Grime music is set to continue making monstrous waves well into 2017 and beyond. 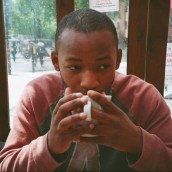 Andrew Kanyemba is a Politics and Economics graduate as well as a mellow mood Musician and Performance Poet.

Who is CASisDEAD? – The Faceless Face of British Rap