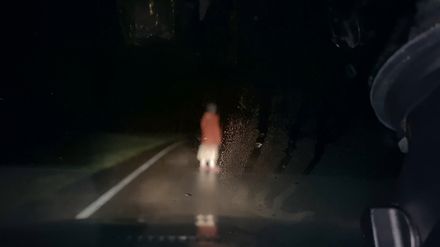 One of last year’s biggest films was a home-made Zoom based horror film called Host. It took the pandemic setting and our anxieties about it and became a calling card for director Rob Savage. His follow up feels like a thematic sequel but is a much bigger film.

Following a slightly (but not very) fictionalised version of Annie Hardy – the internet rapper – she travels to England to see her friend Stretch (Amer Chadha-Patel), when she takes his car and agrees to give someone a lift things take a turn and things get scary.

From the off this needs to be stated: Annie Hardy is unbearably irritating, and since this is her playing herself – she’s the worst. A MAGA hat wearing, anti-mask, COVID-denying, loud mouthed idiot who spews hateful nonsense, ends every rap with a comment about dicks and insults the hospitality of her friend Stretch and his girlfriend Gemma.

It’s difficult to overstate how awful she is, using words like “Libtard”, and mocking people for insisting on masks in their places of work. It gets to a point where there is very little that could happen to her that wouldn’t be both deserved and ultimately cathartic.

When the horror film part kicks in, the gimmick of it being done on a phone as a live stream works relatively well, the comments at the side manage to be both shockingly on point and hilarious at times. Savage also knows how to stage a good fright and the supernatural terror at the film’s heart are executed well enough to work.

There are some well executed moments of gore and terror – someone being burned alive in a windshield is particularly upsetting, and there’s a large amount of tension in flipping screens between front facing and back. It should also be commented that Savage does follow the Stephen King rule book of terrifying, then horrifying, then grossing out – and the gross out is very gross indeed.

The film also has some questionable politics outside of Annie’s character. An objectively awful human being. The two significant other talking roles who meet grisly ends are both people of colour, as well as the main villain, prompting the film to have a slightly right-leaning sensibility, and since Annie’s views and misdeeds are never actually reconciled with – she is the cause of several deaths, and stole her friend’s car, insulted his girlfriend, put his job in jeopardy – she doesn’t actually atone or apologise or even acknowledge these as issues.

Ultimately the well orchestrated and pretty well sustained terror that Dashcam provides is let down by questionable politics, and a lead that is beyond compassion. But, for director Rob Savage this provides another interesting COVID-related scare fest for the hungry audience to devour in groups.