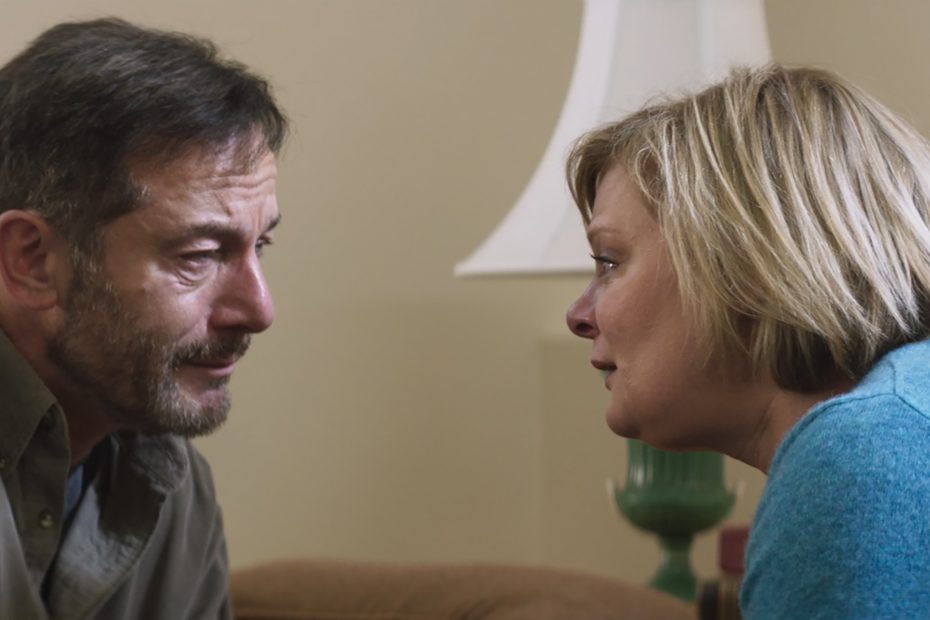 For all the political grand standing, edgy comedy mocking and soul searching, the world truly changed after Columbine. Like so many huge events – 9/11 followed only two years after – there was a before and there was an after. The past twenty-two years have been the after. Anyone who has read Dave Cullen’s exhaustive door stopper account of the events prior, during and after Columbine will see parallels in this story.

Set in a room we meet Jay (Jason Isaacs) and Gail (Martha Plimtpon) two parents of a boy – Evan – shot dead in a school shooting. They’ve gathered years after the event to talk with Richard (Reed Birney) and Linda (Ann Dowd), the parents of the shooter.

Actor turned writer-director Fran Kranz may still be best known as loveable stoner Marty in Joss Whedon produced The Cabin in the Woods, but despite his acting pedigree nothing can prepare an audience for the work on show here. Kranz delivers an at times intimate and others harrowing portrait of grief and blame spread across four people left in the aftermath of death.

The “mass” of the title is a double meaning, the first meaning obviously is the mass shooting that has taken place prior to the film, the other is the fact that this takes place in the backroom of a church. Early scenes introduce us to the well meaning is socially awkward church worker who clearly has no idea how to react to the situation she is peripheral to. Kranz takes what could be a stage-y concept and offers four powerhouse performances to draw the audience in, his editing and camera work is subtle but allows for a film that slowly shifts your opinions when new information is let out.

Jason Isaacs looks like a man who hasn’t slept in days, his bloodshot eyes and tired manner are perfectly suited to a father who is grappling with holding it together. Ann Dowd sheds the stern expressions seen in The Handmaid’s Tale for a look of resigned depression, a mother unsure where she went wrong or even if she did. Her early scenes trying to be accommodating to the other parents and complimenting their photos is awkward, frustrating but speaks to a pain in her own heart – she must experience grief via others, catharsis-by-proxy.

Birney’s Richard is a tough role, the father who seeks to rationalise what his son has done, at times he is frustratingly bullish about his son being as much a victim as anyone else, and trying to focus on mental health and not other issues but the slow etching of his inner turmoil provides. Martha Plimpton provides a performance of masterful intensity. Her face to begin with is so stern and set in one expression of fury that it looks like the smallest tap to her nose might shatter her entire face. It’s masterfully performed as a woman who knows how to get catharsis but cannot really permit herself to it.

The film subtlety explores the interim time between the shooting and the meeting, through conversation we gather basic information. Richard was clearly a workaholic, and has divorced Linda in the interim time, their marriage unable to make it through their son’s actions. We gleam that Jay has thrown himself into anti-gun activism, and both he and Gail have publicly said things about Richard and Linda that appear to be unkind and regretful. 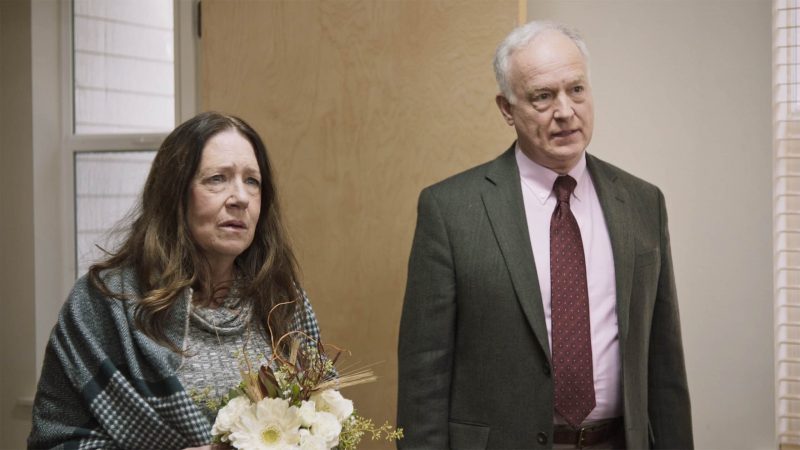 There’s comments of what might have driven Hayden to shoot ten people – the school grading system (“he was quiet and had good grades, he didn’t warrant attention”), mental health not being enough to support people with clear issues. Video games, the old standard, get blamed as he was into Call of Duty, at one point a debate happens about if it’s a video game or a war simulation, the easy access to guns.

There are clear parallels between this fictional incident and Columbine, Hayden is spoken about with clear allusions to both Dylan Klebold and Eric Harris. Both men were fans of violent first person shooting games, much like Hayden. A past involving making pipe bombs is referenced much like the two from ’99. Hayden, like Klebold was an angry depressive who wrote in a journal and couldn’t quite fit in. But like Harris he recently moved and appears to be the younger of two siblings.

For all the moments of explosive anger and deep rooted anger the moment that speaks most to the pain of those left in the wake comes from Birney’s Richard who until then has rationalised the events as unavoidable. He speaks of tributes paid to the ten victims – nine students and a teacher – before saying that there were eleven victims. His son. That memorials only listed ten names, there were only ten funerals, ten graves, and that his son was ignored and only few people were allowed at Hayden’s funeral.

This moments appears to be moment of crystallisation, there are no systems in place for these things. Guns are still easily attainable, schools are still dangerous places and mental health can only be helped if the funding is there. There are no people to blame because everyone is to blame. Every day mental health organisations aren’t funded is blame on everyone, every day the US does not ban guns is blame on them, every moment of every day thousands of people feel isolated and without help is blame on all people. Columbine was a watershed moment, except it wasn’t. Shooting drills were put in place but not efforts to actually stop this violence.

What has happened is a case of building the arc after the flood has come, if the shooter is in the building people are going to die and no amount of closing doors will change that. This film reminds us that “thoughts and prayers” are useless when burying your teenage son or daughter, that saying “now isn’t the time for these conversations” is true – it was the time on April 20th 1999 when two young men with major documented issues took easily accessible weapons and fired them into their fellow students before turning them on themselves.

Mass is a film that won’t age, because nothing will change, and so the themes will be evergreen issues. And yet, for all the anger felt, for the grief on display what Kranz actually does is offer one word to cure the pain those people might feel. Forgiveness. Not just of others but of ourselves, of our failure to act, react or see things that were obvious.

Kranz and his crew have made the most humane film of the year, and one that should be on every person’s top ten without fail. A film that should be shown in schools across the world to show the after effects of violence, and what is left behind after the smoke clears and the bodies are buried. Masterful.