Looking back at Logan: Our Top Ten Wolverine Moments

For every step forwards he took in his career, Chuck Berry took a step backwards.

On 18 March 2017, famous rock n roller Chuck Berry died aged 90 years old. We all know that shock you get, when one of those rock n roll legends that you unconsciously assumed would live for ever, passes away, but everyone inevitably does. Mr Berry left quite an impact on the world (And possibly even worlds beyond this one!), and although he didn’t live without controversy, he undeniably played a key role in shaping music as we know it today.

Charles Edward Anderson ‘Chuck’ Berry was born in St Louis, Missouri, in 1926. It was here in St Louis, where Berry began playing music with bands. After a short spell in prison for armed robbery, Berry was selected to replace the guitarist in local jazz and blues trio, The Johnnie Johnson Trio. Soon after joining The Johnnie Johnson Trio, Muddy Waters suggested that they go to Chicago to meet Leonard Chess, of Chess Records, the label known for signing artists including Muddy Waters, Howlin Wolf, Etta James, Bo Diddley and more. The Johnnie Johnson Trio signed to Chess Records as The Chuck Berry Trio, and in the summer of 1955 Berry’s first single Maybelline was made, a smash hit coming in at #3 in the Billboard top 100.

Subscribe for more stories, news and opinions from No Majesty

Berry went on to have numerous hits throughout his 6 decade career, including the songs Roll Over Beethoven (1956), School Days (1957), Sweet Little Sixteen (1958), and Johnny B. Goode (1958). In 1962, Berry was sentenced to 3 years in jail for transporting a 14 year old girl across state lines. Shortly after his release in 1963 —serving roughly a year and half — Berry had a few more hits such as Nadine, No Particular Place To Go (1964), You Never Can Tell (1964) and My Ding a Ling (1972), despite his ‘difficult-to-work-with’ notoriety.  Now he mainly toured solo, using local backing bands he’d never played with, and these sloppy performances tarnished his reputation of success and musical innovation. He demanded nonnegotiable cash payments for his work, and it was these cash payments that landed him in jail again in 1979 for tax evasion. Interestingly enough, however, NASA’s Voyager 1 had aboard it the “Golden Record” which contained the sounds of Earth, and the only rock n roll track on it was Berry’s Johnny B. Goode.

For every step forwards he took in his career, Berry took a step backwards as well. In the late 80’s he purchased a restaurant and installed cameras in the women’s toilet cubicles, and after a police raid on his house it was found that the footage contained images of a minor using the cubicle; this along with other sleazy pieces of footage. He wasn’t convicted for this, however he was set back $1.2m in settlement charges brought by nearly 60 women, and served just 6 months jail time for the marijuana that was uncovered in his home.

His new album ‘Chuck’ is set to be released in June 2017, it will primarily be originals written and produced by Berry himself, his children feature on the record and it will be dedicated to his wife of 68 years, Toddy. 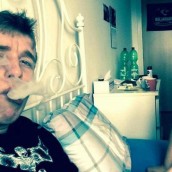