John Hurt: In Memoriam – Some of His Greatest Roles

In the realm of the period of the 70’s, and advent of British “progressive” rock, if ever there was a namesake associated with the electronic keyboard and Moog synthesizer and its mastery – it would be Keith Emerson. The dexterity and innovative passages in his music, from classical to Copland’s “Hoe Down” – to jazz-rock – and back again, with rocket fast staccato-style runs across the keyboard, Emerson was a “heavy” presence of sound in a crowded field of British super groups.

There were other British “progressive rock” bands that are now considered seminal, such as “Yes”, “Pink Floyd”, “King Crimson” and “Genesis”, and these groups all exhibited a variety of exceptional musicianship. But Emerson’s masterful keyboard playing became a dominating signature feature of this innovative, particularly British-genre of 70’s rock – making what we now call “art”, with his sound.

Starting back with the freewheeling 60’s offbeat psychedelic band “The Nice”, Emerson became known as the “Jimi Hendrix of the keyboard.” (Telegraph). Originally a back-up band for soul-singer P.P. Arnold, Emerson (keyboards, vocals), Lee Jackson (Bass, vocals), Davy O’List (Guitar, vocals) and Ian Hague, and then Brian Davidson (drums) became a transition point for Emerson’s fusion direction. Flashy on-stage, forceful as a showman and on-fire with command over his Hammond organ and later Moog synthesizer, Emerson and band members of The Nice were at their best live. With possibly a nod to Hendrix’s Monterey Pop Festival excesses with his guitar, Emerson would “wrestle” with his instrument on stage and literally use props like daggers to hold down additional keys to sustain a note or chord – in full leather viper-like pants and an open vest. With the eventual disintegration of this band, and Emerson’s desire to create his own power-house trio ensemble, he declared in 1968 that The Nice had “outlived its usefulness” and the hunt was on. His next step would be to form what would become a leading-force in the “progressive rock” genre: Emerson, Lake and Palmer.

READ NEXT:
No Majesty Music Profiles: The Knife - a duo that kept everyone guessing til the end

The beginning search for key seminal musicians that led to ELP would initially frustrate Emerson. As he was set on a “power trio” concept, he also had in mind very specific parallel talent – fellow British musicians who were friends as well, that he’d already pegged for selection. In a YouTube interview (April 2014,”Brainstorm with Keith Emerson”) Emerson discusses, with a smirk, the first phone calls he made. Both the brilliant technical guitarist Steve Howe, and the equally formidable and talented Chris Squire would turn him down,  as they were forming a band themselves, which would later become ‘Yes’, another undeniably powerful force in prog-rock. Finally meeting Greg Lake, the guitarist and vocalist of ‘King Crimson’ on tour together, and later auditioning Carl Palmer of ‘Atomic Rooster’, ‘Emerson, Lake and Palmer’ would be launched into the world in 1970.

From their first self-titled release, Emerson, Lake and Palmer (1970) to their last, Works Vol. 1” & “Works Vol. 2(1977) and “Love Beach”(1978), ELP was to thrive on highlighting each individual member’s talent. Emerson himself would dictate a profound mix of classically influenced keyboard with rock compositions carried by the smooth and resonant vocal accompaniment of Greg Lake (also doubling as a skillful bassist, melodic guitarist and songwriter). These would be rhythmically supported by the hyper-fast drumming, percussion instrumentation, soloing and accentuation of Carl Palmer. A super–group was born.

A very fertile and commercially successful period of album recording included two No. 2 spots on U.K. charts( Trilogy, 1972 & Brain Salad Surgery, 1973). Both releases also reached No. 5 spots and No. 11 on U.S. charts respectively, while hitting the concert circuit with massive and spectacular stadium shows, eventually selling over 40 million albums internationally. Driving this force was Emerson, “perhaps the greatest, most technically accomplished keyboardist in rock history” (Allmusic, Steve Huey), serving as the front man and mixer of ELP’s progressive rock sound. But alas, ego’s, artistic division and exorbitant touring costs, some of them resulting from Emerson’s addition of full orchestration, finally ended Emerson, Lake and Palmer by early 1979.

There was one attempt at reformation of the band, “Emerson, Lake and Powell” in 1985, and a reunion tour, but mostly other smaller less commercial projects were invested in by Emerson. Later in his life, Emerson would be affected by periods of depression. Coupled with these emotional challenges, he would also face carpal tunnel syndrome in his hands and eventual nerve damage affecting dexterity. In March of 2016, confronted with the commitment to return to some form of performance, he suddenly took his own life. According to a statement released by his girlfriend Mari Kawaguchi, Emerson had been “tormented by worry” about an upcoming tour in Japan; “He was a perfectionist and the thought he wouldn’t play perfectly made him depressed…”. Many fond remembrances and tributes by fellow musicians can be found online, from both legendary and current artists. But perhaps the most direct and poignant reflection is in the words of fellow band member Carl Palmer, the former drummer for ELP : “Keith was a gentle soul whose love for music and passion for his performance as a keyboard player will remain unmatched for many years to come. He was a pioneer and an innovator whose musical genius touched all of us in the worlds of rock, classical and jazz”. 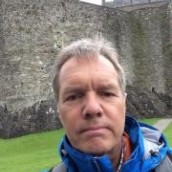 My lifelong passion for writing and literature (which are wed to each other) continues to stay active, with art and cultural freelance writing assignments for on-line entertainment web sites. Home has been New England, the Rocky Mountains, and London and lots of places travelled through books and points of view.