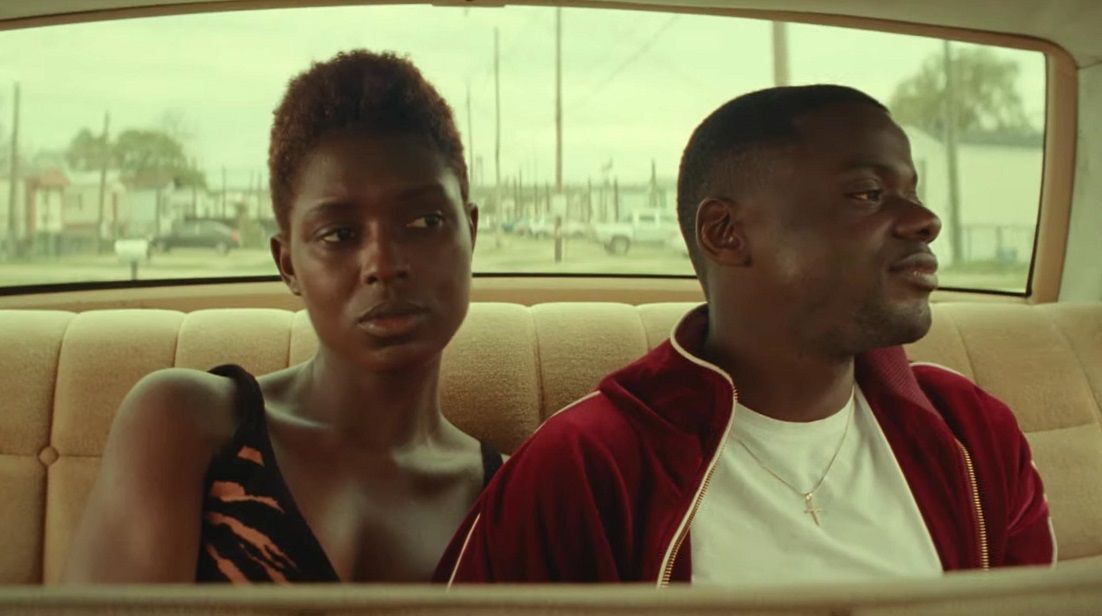 A small caveat before we begin: as a reviewer, you would expect a certain amount of cine-literacy and understanding of what makes a film good — my degree and experience supports that — however, with certain films you cannot fully understand the nuance involved if you are not part of a certain minority. Given that I am both white and British, the stop and search scenario that has claimed several black American lives is foreign to me. That said, we at No Majesty endeavour to understand people with different life experiences than ourselves, and we also know a good movie when we see one — but it bears repeating that the nuances of those situations might be lost on this reviewer.

Queen & Slim starts out brilliantly, two black Americans – criminal defence attorney Queen and teetotal Christian Costco employee Slim have an awkward Tinder date at a diner. What works about this is the simplicity of it. Both are unashamed to be themselves, it’s the kind of awkward date that could easily open a Richard Curtis rom-com instead of a racially charged drama film. Queen is reserved, happy in her loneliness but after a tough day — where a client was sentenced to death — a glass of wine won’t cut it, and she opts for a late-night date with Slim because his profile on tinder looked “sad and lonely”.

Lena Waithe’s perfectly pitched screenplay makes something very clear — this is a story of two people. A date and a stop-and-search — both take place before tdahe opening titles — are both so radically different in tone but consistent in character you would think that Waithe was a seasoned screenwriter the likes of Aaron Sorkin.

Once pulled over the situation plays out generally as you would expect. Being black Americans, both our protagonists know their rights — though they have differing views on how to act, and the officer is the worst type of racist. When Slim kills the officer in self-defence and it’s caught on dash-cam, they go on the run, and the film really takes off.

The story of a black male being harassed and abused by the police is not new, and so this story may appear like “just another one” – and yet no one says this when it’s another World War II film, and in the same way, these stories either real or fictional do need to be told to remind us what keeps happening in the world.

The film comes relatively hot on the heels of The Hate U Give, Fruitvale Station, even a particularly pointed episode of Brooklyn Nine-Nine, all dealing with the same systemic prejudice. Sadly it wasn’t a new thing then, it wasn’t even a new thing when Spike Lee showed it in Do the Right Thing way back in the late 80s.

What stops this being just another story of black oppression though is the four main people involved. In her feature debut as a director Melina Matsoukas has a very clear eye for both the beauty and hostility of the world. This is a road movie, and it’s a beautifully shot one, the travelling sequences show the beauty that America has to offer, and even though the story is heavy the film isn’t afraid to be light.

In a non-flippant way there is a life-and-death equation that calls to mind Terrance Malick at his peak. A sex scene intercut with a protest-turned-riot is both a heavy character moment that also serves to show the themes of the film. But, it also helps that there is humour in the screenplay also.

The film is not just a flag-waving black pride piece though — it has a much more balanced mind. Both Queen & Slim are good, fair people, and the political movement and civil unrest that follows them is not what they wanted, and not what they approve of either. Alongside racial commentary, there are also pointed pot-shots taken at the treatment of veterans, as well as the justice system in the US completely.

All of this would be much harder to watch if it wasn’t for Daniel Kaluuya and Jodie Turner-Smith in the lead roles. Following his turn in Get Out, where he was required to show the suppression of anger and the growing fear Black Men face in the world today, and his sinister turn in Steve McQueen’s Widows where he was a frightening figure, here Kaluuya shows another, quieter side of himself, where the emotion is all in his face.

Similarly, Turner-Smith’s debut performance in this film is a truly fantastic one — if the recent Academy Awards were indeed fair she would surely be ahead of the pack to win a Lead Actress nomination.

But even the supporting roles are good – Bokeem Woodbine brings a levity to the film as Queen’s uncle Earl, a man described as a nobody outside but a king in his house, while small supporting roles from both Chloe Sevigny and Flea round off the cast.

The idea that one particular kind of socially relevant event can be turned into something different is a very timely issue, but another key portrayal here is black men’s attitude towards black women. This is an issue brought forward before, most notably by Serena Williams, and though the film is not about it, there is a strong hint at a kind of disrespect black women may often face from their male counterparts.

In the end, the film is timely, yes, but timely doesn’t always mean good. It just so happens that what we have here is a compelling, often tense and upsetting, but very moving story of two human beings, and the cruelties this world can inflict upon them. It’s a damn-good film, an important one, and one that should be seen again and again, not just for its message but for the craft that has gone into it.