Like the lurid contrasts of a Warhol, or a compressed pop vocal, our attitudes and beliefs are building in intensity, being reduced and reduced like a sauce into something tart and elemental.  The culprit: algorithmic platforms that entrench our beliefs.

The contours of our beliefscape have all been turned right up, creating deep valleys that can no longer surmount the mountain ridges that separate them.

It is the Hebrew year 5777, or the year of our Lord 2017, and Donald J Trump is to be sworn in as President of the USA. This is happening for him at the precise age of 70 years, 7 months and 7 days; this is a fact, a fact with a lot of 7s in it, but what you might have noticed already, is that it means precisely 0.  We do still really like facts, but we like meaning more.  This creates an open market for things which seem like facts, but rather have meaning. Meaningful fake facts, which have made Macedonian teens rich. And then there’s just pure hype, like the idea we are living in a post truth age.

Robert Shea and Robert Anton Wilson’s crazy cult classic ‘The Illuminatus! Trilogy’ is riddled with 23s. It becomes a kind of paranoid 70s countercultural running joke. The two originally  got the idea from William Burroughs, who whilst reflecting on the recent death of Captain Clark and his entire crew on the day he bragged that he had been sailing 23 years without incident, caught a radio announcement of an airline crash in Florida: Flight 23, piloted by a Captain Clark.

The point is that you’ll notice a lot of 23s out there now I’ve recounted this story, just as I found myself noticing that The Illuminatus! Trilogy was written in the 70s, before remembering Trump is to be inaugurated in his 70s. This is how our minds seem to work; how we construct our filter bubbles, through our confirmation bias. Essentially that’s all it is.  Facebook et al have just worked out a way of monetizing it.

Many of the purveyors of fake news, the rumours and gossip fetishized by one tribe or another, are themselves fake. Twitter bots, programmed to retweet according to one off-the-peg ideology or another, circulate fabricated news stories, which in turn affect our exposure to them in exactly the same way our most like-minded peers do.  If this is the case, if we are just behaving like Twitter bots, shouldn’t twitter bots be given the vote?

Twitter bots, of course, don’t have bank accounts; they are sans papiers, second class citizens with no rights. The EU’s Legal Affairs Committee have only just begun considering giving autonomous robots the legal status of persons. From the other side of the screen however, in the algorithmic dark, we are all alike, working in time to oil the flow of capital, into the coffers of the tech elite, and we like it.

We consider ourselves free-willed and open-minded sovereign individuals.  Yet adverts do exist.  Fake news does exist.  By complaining about the influence of advertising or algorithms, we occupy an interesting position – one where we are free enough to take a stand on an issue but undercut by the issue itself; the issue being that we are predictable and disciplined by soft power. To complain about being manipulated is a paradox, when if you were really being manipulated, you wouldn’t even know that you were.

Could it be that the popularity of the TV show Gogglebox is a nostalgic reassertion of a dying paradigm? We love to watch a diverse range of families reacting differently to exactly the same material, because of this perceived paradigm shift to a social media world. In this world, everyone is watching different things, and reacting exactly the same, that is, with a kind of bland uncritical assent.

And hasn’t this intensification of internet tribes, the ascendancy of fake news, identity politics and the backlash against globalism occurred in part as a reaction against the real news, the monolithic establishment?  Given the shadiness surrounding the death of Dr David Kelley, the question is whether we can we be sure that back in the halcyon Gogglebox world of old media, the truth was not sometimes presented as if it were a lie. This is perhaps an even more damaging tactic, especially when centralised.

The Hutton report is kind of fake fake news. A fake news story cooked up by the government’s spin Doctors -the idea that Saddam Hussein could fire WMDs in three quarters of an hour- was presented as real by presenting the story that it was fake as fake. The director general of the BBC resigned over these factual stories.

The extent to which platforms like Facebook and Twitter – which aggregate, curate and infuriate – are dangerous is the extent to which they are parasitic on these older more expensive media nodes.  Where do we get our confirmation bias from in the first place if not our tribal affiliations to news sources, and family TV viewing sessions?  This learnt performative group behaviour, first developed by traditional means, is then reinscribed into algorithmic filter bubbles.

The Gogglebox and Google-box paradigms rub each other up the wrong way.  If we were truly atomised into echo-chambers there would be a need to establish larger and larger territories of agreement, structured by shared codes of veracity and fairness.  People would have to opt in to these agreements, so no-one could complain.  It’s like capitalism in that it appears neutral and bland and innocent, but distorted.  The trick is, when you iron out all the distortions, there is nothing.

Dave Rubin, rather sweetly and hopefully with Socratic irony recently asked his guest ‘Why not just remove the algorithm from the equation?  Everyone’s got their feeds..’  But of course there is no feed-in-itself, it’s all filter, all the way down.  And this is good news, because whilst facts are recalcitrant, we can flex our filter bubbles, improving and expanding them, bubbling up. 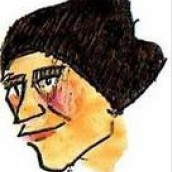 Matt Parry is a London based composer and artist and blogs about theory and current affairs.