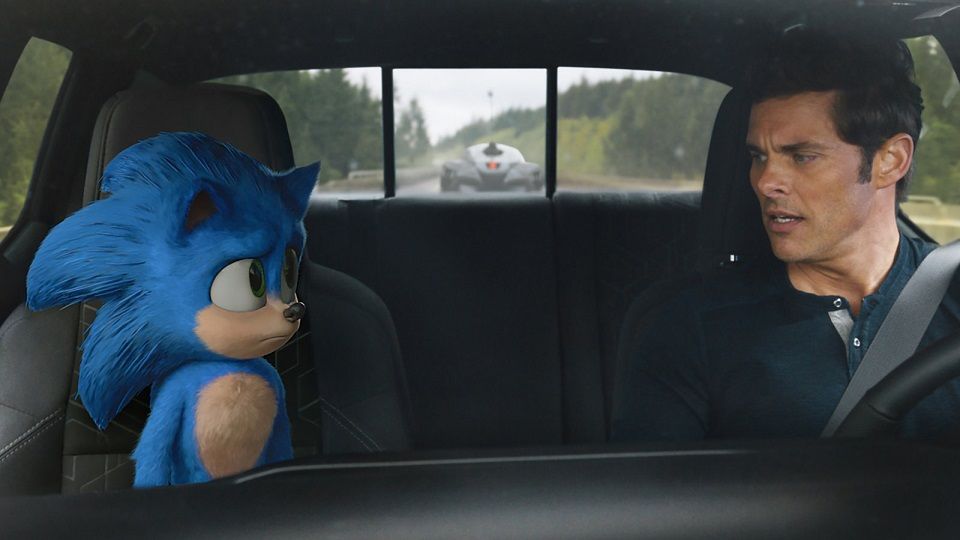 The video game to movie curse is one that in recent times has started to abate. Rampage was a fun riff on an arcade game that probably took very little and just went “big monsters + Dwayne Johnson = profit?” Tomb Raider might not had been the runaway success many had have hoped for, but it made enough to tempt the studio into making a new one, and Assassin’s Creed was muddled but it wasn’t terrible. And, of course, last year’s Pokemon Detective Pikachu was a heartwarming success that won over poke-fans and newcomers alike thanks to a surprisingly clever script, and a typically funny turn from Ryan Reynolds.

On the heels of these films comes Jeff Fowler’s Sonic the Hedgehog. It is, believe it or not, the second iteration of the movie since the original trailer dropped, and the weird semi-human looking Sonic re-design was so badly received by absolutely everyone that the film was delayed by a few months, so they could sort out the design to look more like the video games.

They needn’t have bothered, because the film is so truly boring that it might as well not exist at all. While Detective Pikachu took inspiration from one of the weirder Pokemon offshoot games and wrangled it into a loving homage to the franchise, Sonic is not a narrative series that has any real story to gather from.

That may seem harsh, but it’s not: aside from running really fast to collect rings and then bash Dr Eggman / Dr Robotnik’s like hovercar until it explodes, there’s nothing really to see here, so instead of an animated adventure film that could have seen the fun supporting characters come in for a zippy CGI animated film ala Into the Spider-Verse, we have what amounts to a remake of Hop.

This isn’t helped by the presence of James Marsden. Like Garfield coming along to show just how good Scooby-Doo:The Movie was, Sonic the Hedgehog reinforced just how clever Detective Pikachu was. Now, if they can manage to do a live-action Mario film and give us a cinematic universe of Smash Bros. we might be in business but it seems unlikely.

Marsden is a decent enough actor, with a Kennedy style look about him, but for some reason cannot land a role that shows his ability, what he really needs is a miniseries that exploits the fact that he looks like JFK — on the basis of this film, he’s not going to get far.

Ben Schwartz is perfectly fine as the voice of Sonic, he is neither big enough that the role dominates the film, nor unknown enough that you wonder why he got the job. The supporting cast are fine, though very much underused. Tika Sumpter, Natasha Rothwell, Adam Pally, and Neal McDonough show up long enough to collect a decent wage.

There are sequences that are ripped right from the later X-Men films, a sequence in a bar where Sonic runs really fast so everyone appears to stand still so he can mess around with everyone, and to this end there’s some funny things to be said, even if it’s an over used super speed trope.

For a film that is a breezy 90 minutes it feels longer, dragging it’s heels before it reveals it’s masterstroke – Jim Carrey as Dr Ivo “Eggman” Robotnik. Carrey manages to make the film work when he’s on-screen.

Despite looking nothing like the Robotnik from the game, Carrey’s unhinged portrayal is a call back to his turn as The Mask or The Riddler and he gets the measure of the film. It reminds you that despite his current spate of being really weird in interviews (and not in the good way) and his political art and weird existential crisis Carrey is essentially a living cartoon character. It’s his best comedic turn since A Series of Unfortunate Events some 16 years ago.

Fowler, in directing, also has some style in how he depicts Sonic being really fast, and dealing with action but the film is too low of exciting sequences, and it suffers from the usual issue with these types of films – the character never looks like he’s there. It never feels like two real people interacting. Perhaps thats a factor of not using performance capture or perhaps its a factor of the design, but it never comes together in anyway.

It’s neither total dud nor riotous success, and though it’s halfterm release does mean it’s no-fault fun for families to enjoy, and it’s brisk runtime and kid-friendly slapstick will make it a success, it really lacks the “oh wow this is actually decent” of last years CG/Live-Action caper, and instead is perfectly average viewing.