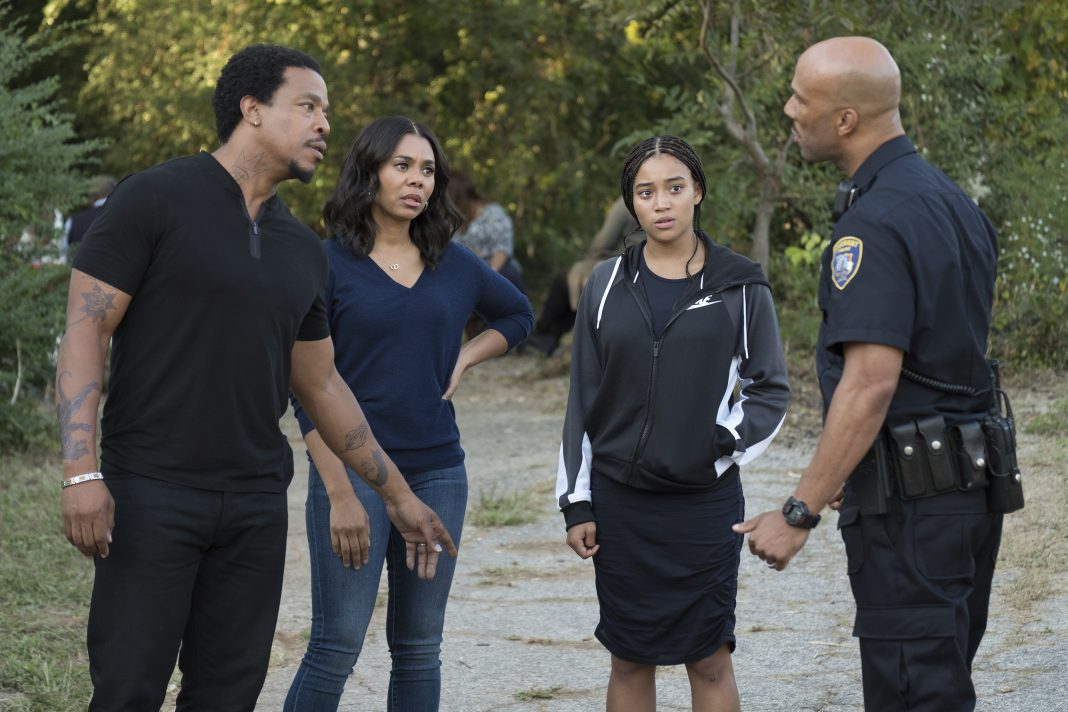 Given the legacy of racial hatred in America, and the rising no more attitude of the POC element in the US, it’s not all that surprising that some twenty years after the original movement of angry African American filmmakers – the likes of the Hughes Brothers, John Singleton and Spike Lee – has given way to a new movement.

The first perspectives of modern African American life are most obvious in Best Picture winner Moonlight and Best Original Screenplay winner Get Out. Now, The Hate U Give, based on the Young Adult novel of the same name, gives us arguably the most compelling Black Lives Matter film of recent times.

From director George Tillman Jr., a man known for Notorious (about the life of Notorious B.I.G.) and Men of Honour (about the first African American naval officer), the story follows black teenager Starr Carter a young girl who lives a normal life with her store owner father Maverick, her nurse mother Lisa, her half-brother Seven and younger brother Sekani. She lives in a black neighbourhood mired by crime and the activities of local gang-leader King, but attends a white private school where she witnesses the appropriation of her culture all the time. When her childhood friend is killed by a cop during an all too common stop and search, she has to wise up and find her own voice.

From the get-go, The Hate U Give lays out its table pretty clearly. The opening scene, a powerful one in which a young Starr and Seven are sat down by their father, and told about their rights and how to deal with a basic stop and search, is a supremely uncomfortable watch, even if it’s told with love. The introduction of Starr, who narrates the film, explaining how the life she leads around black people is different to the life she leads around white people, is a cutting discussion of societal expectations.

As a director, it says a lot about Tillman, Jr. that he actually respects the source material – the book by Angie Thomas, adapted well by the late Audrey Wells. The film makes great use of the voice over, and the internal monologue comes and goes, but it’s always with a point. The dialogue is alarmingly sharp in the way it portrays not only big issues, but small ones like the everyday racism a black woman faces from her white friends the repeated use of “girl”, or terrible slang appropriation.

In the central role, Amandla Stenberg is as engaging as any lead actress, easily holding the screen. Her more pronounced speech in school – at odds with her “ghetto” talk at home shows a skill at modulation few performers have. Stenberg is no stranger to the YA subgenre having played Rue in The Hunger Games as well as botched films like Everything Everything and The Darkest Minds, but here she is given a role she can grasp. 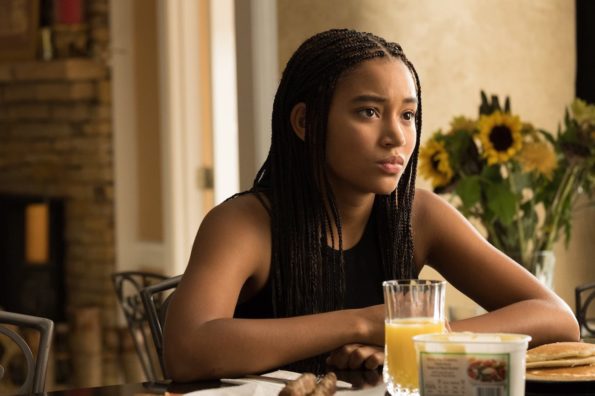 In one sequence in which a party goes wrong, forcing Starr to flee with childhood friend Khalil (Detroit’s Algee Smith) is shocking and the following ten minutes are stomach churning. We know what will happen, but the lead up hurts to watch even, for a 12A film. Thanks in part to the small but effective work of Smith, and Stenberg’s powerful performance, the ten minutes between them feels like an eternity of menace and a struggle against a corrupt system.

Around Stenberg the cast shine, Russell Hornsby is the MVP of the film as the former gang member and father Maverick Carter, his stern authority giving way to a loving husband and devoted dad who both loves his daughter and his heritage, but knows neither can coexist without issue. Regina Hall as her mother turns a recurring motif about being grade-obsessed and wanting to move into one mother’s scream of fear while Lamar Johnson is quietly strong as her half-brother Seven. Even smaller roles which flesh out the story are done well, Anthony Mackie is surprisingly menacing as gang leader King, while Common lends a few scenes some much-needed gravity as cop uncle Carlos.

Read next:
Honey Boy review - an important film about making sense of past trauma

The film is also surprisingly balanced in how it shows prejudice. Not all the prejudice shown is against the black community; one incredibly well-done scene shows Starr confront her uncle on his style of stop and search and how he would have shot first on a black youth, but have given more warnings to a white one. Similarly, a dinner scene with the family leads to a police frisk that is haunting and all too hurting.

Even the explanation of the title, Tupac’s explanation that THUGLIFE means The Hate U Give Young Infants Fucks Everyone, is a clever examination of how poisonous the act of hating others for no reason really is.

There are some issues with the film, namely the final ten minutes, which are almost fairytale in how they show the fallout from the film’s events, which might be to set younger viewers minds at ease, but seems at odds with the somewhat realistic tone of the film that has followed. It also doesn’t fully examine every idea it throws out there – false sympathy is shown but not explored, as is black prejudice against white people – the idea of Maverick being Spencer Tracy to KJ Apa’s boyfriend’s Sidney Poitier is an interesting point not fully explored.

Even so, this is a film that has a lot to say and – maybe like its central hero – not enough time to say it. After all, this is not just a story of a black person, which in itself is relevant. This is a story of a black woman, one of societies marginalised individuals finding her place and her voice in the modern world and screaming for all to hear. The Hate U Give is a timely story that is essential viewing for parents and children to show issues, to discuss issues and to hopefully end these issues. This might not be this generation’s Do The Right Thing but it’s on the right path, and it will only get more and more relevant.

Like what you’re reading? Check out our film newsletter, and get the latest news and reviews straight to your inbox.

The Invisible Man review – a clever, thoughtful horror driven by a great performance