The Post review – a triumph of message and performance 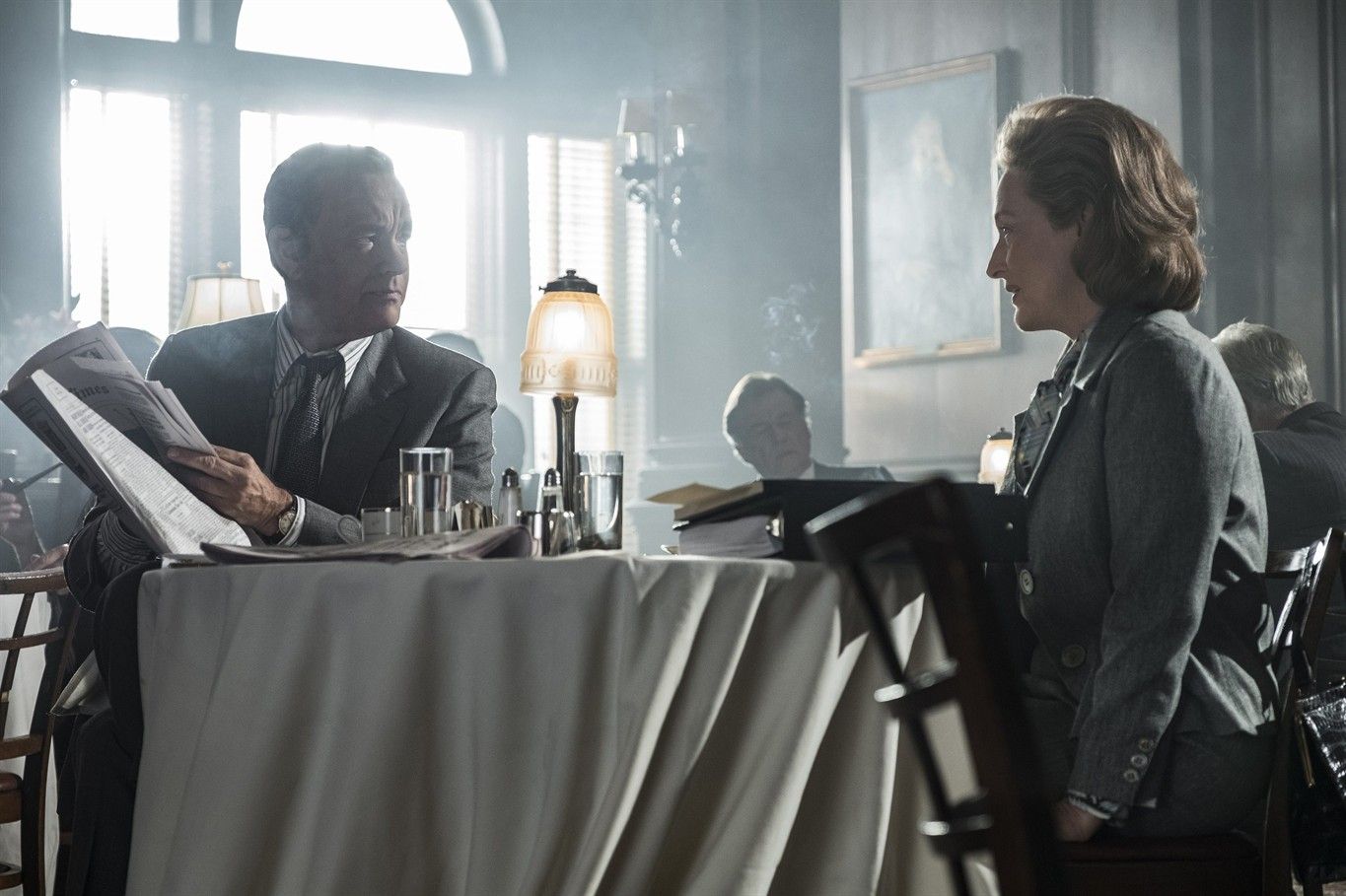 Steven Spielberg and Tom Hanks teaming up is a reason to get excited, be it their TV production roles on The Pacific and Band of Brothers, or their actor-director collaborations. Intriguingly, all their cinematic exploits happen to be based on true stories – some sticking closer to events than others. In the past they’ve brought us Saving Private Ryan (based loosely on the story of the Niland Brothers), Catch Me If You Can (based on the story of Frank Abagnale Jr.), The Terminal (very loosely based on the life of Mehran Karimi Nasseri), Bridge of Spies (the true court case of James B Donovan attempting to trade Soviet spy Rudolf Abel for an American prisoner), and now The Post.

The Post is the true story of the Washington Post, a newspaper that at the time was run by Katherine “Kay” Graham, the first woman to hold such a position of power in a newspaper. In the 70s, she lives in a world which doubted she could do the job that her father gave to her husband when he died and fell onto her shoulders following her husband’s suicide. For Kay, there is a little bit of salvation, much of the really intense work is shouldered by the grizzly Ben Bradlee (one day Sr), until of course, Bradlee offers the story of a lifetime, one that could bring down either the newspaper… or the White House.

To begin with, the film is about a newspaper going to press with a story about a President(s) who have been keeping things to do with oversea policies from the public. This could not be more pressing a subject – given that Donald Trump is always going on about Fake News like it’s a real thing, and moreover, the idea that an alternative fact could be a real thing is such an utter crock of shit that Nixon looks like Abraham Lincoln by comparison. It’s also a story that is in keeping with the current spate of women-lead stories. Kay Graham is doubted at every turn; by people that think a woman can’t run a newspaper, and can’t shoulder the responsibility, which we know now can be done, and can be shouldered by any and all genders. 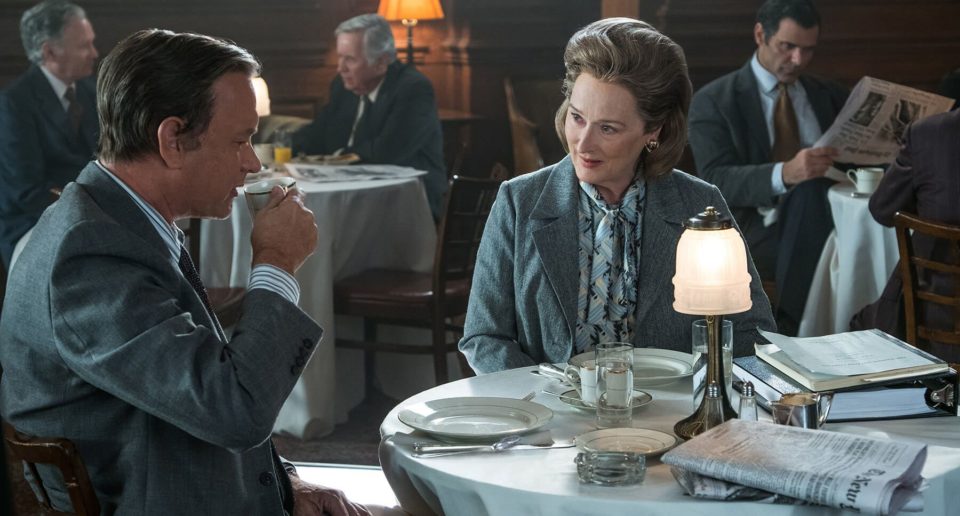 Needless to say that the performances are flawless, in particular Tom Hanks and Meryl Streep. The two are veterans that audiences love, and it’s impossible not to get angry that they make it look so damn easy. Clearly Spielberg agrees; with his film lingering on their faces and letting them do the acting. He’s hired two of the most dependable actors in the world, and he’s going to just let them do their work. As Kay, Streep is once again a one-woman tour-de-force, as someone who has trouble being seen in a male lead world. It’s the anti-Thatcher performance, where she is less fire and brimstone and more a quiet determination. Hanks is also brilliant as the old-fashioned brow beater Ben Bradlee – he’s old fashioned and hard working and Hanks nails it perfectly. 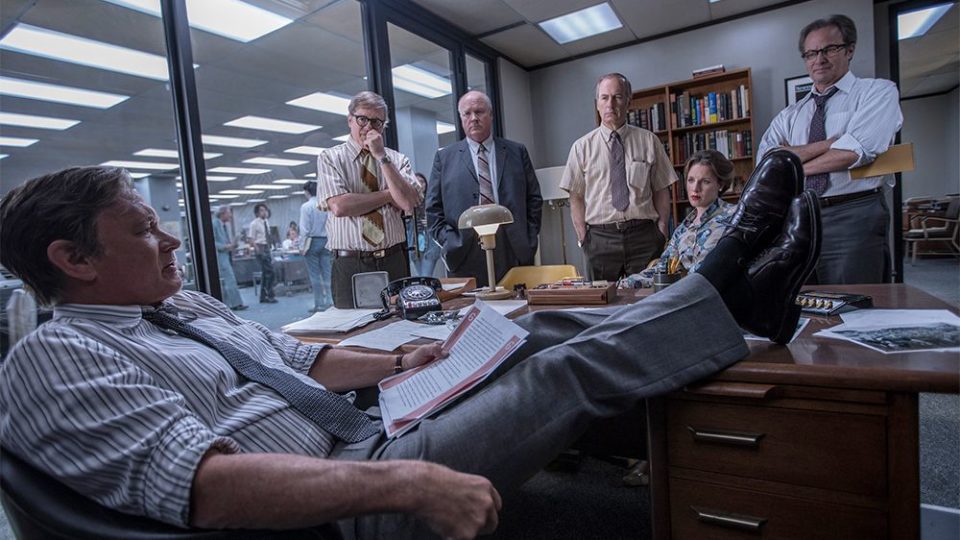 Oddly enough, Hanks here plays Ben Bradlee, father of Ben Bradlee Jr who makes an appearance in Spotlight, both films about newspapers, both timely, and both with co-screenplay duties by Josh Singer. Not meta enough? The film is dedicated to legendary writer-director Nora Ephron, a close personal friend and collaborator of Streep, Hanks and Spielberg, and a former wife of Carl Bernstein. Yes, THAT Carl Bernstein, he who uncovered the Watergate scandal along with Bob Woodward – an event that directly follows the publication of the Pentagon Papers. Does your head hurt? Ours does.

It can’t be overstated just how earnest a director Spielberg is, he’s a man who believes in the stars and the stripes and the US constitution. The words of Bradlee and Graham are what he believes in. Like most of his films, this has it’s emotions on its sleeve and like previous political films the constitution is a subject he has returned to time and time again, be it in relation to the slave trade (The Colour Purple, Amistad, Lincoln) or the Cold War (Bridge of Spies) or now this. He’s a man who believes that the land of the free is for all, and for everyone to be equal – all should be held to the same standards.

At a certain point, this level of Jimmy Stewart earnestness can get a little much, and John Williams’ brilliant but emotional score begins to get a little too much. It doesn’t help that his entire film is populated by decent actors that at times are given very little to do: Sarah Paulson, Bradley Whitford, Bob Odenkirk, Carrie Coon and Bruce Greenwood get given short shrift as the film becomes predominantly about the relationship between Hanks and Streep. When the film works, it’s in the scenes of the two of them acting, sparking off one another, or in the scenes of the printing press. Again, Spielberg is clearly in love with the old clinking and clanking machinery of the old fashioned printing press. His style as a director is only becoming stronger as his career goes on.

Even in the opening scene, a look into the war in Vietnam has his hallmarks of blistering warfare. The scene of guerrilla warfare is so painful and in your face that it makes you wish Spielberg would make a Vietnam War film; after all, he’s mastered pretty much every other war. American Civil War (Lincoln), First World War (War Horse), Second World War (Saving Private Ryan, Raiders of the Lost Ark, Empire of the Sun, Indiana Jones and the Last Crusade), The Cold War (Bridge of Spies, Indiana Jones and the Kingdom of the Crystal Skull), it’s time for him to master the last great American war proper before the end.

The film is a triumph of message, and of performance. Even if it lacks the emotional heft or downbeat, slow pace of Spotlight or All the President’s Men… it is a good film.