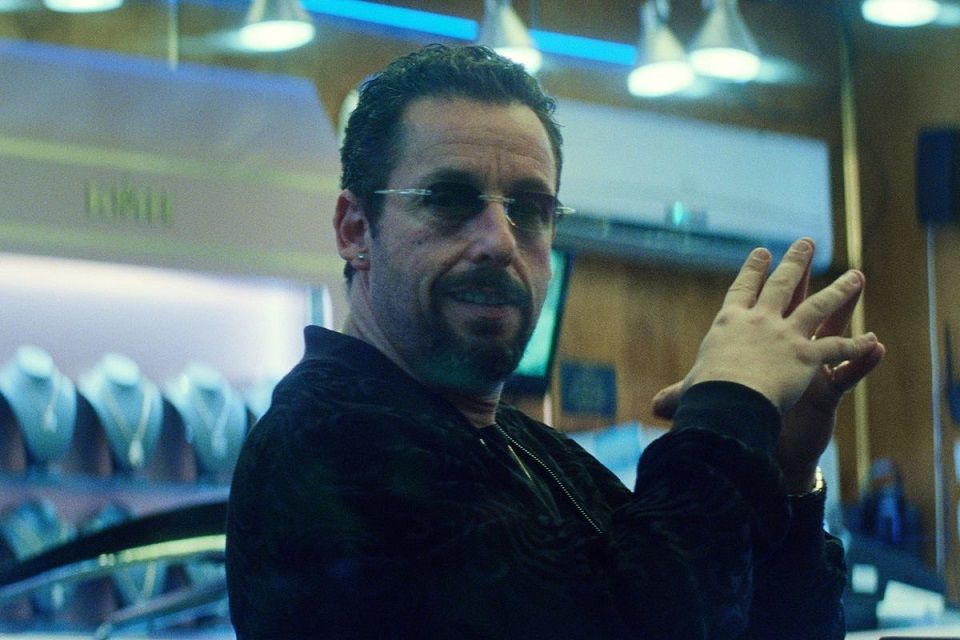 The ‘funny person does serious movie’ moment is a time-honoured tradition that brings with it a certain level of awards notoriety. Think Peter Sellers in Being There, Robin Williams in Good Will Hunting, Mo’Nique in Precious and even Jim Carrey in The Truman Show. It seems rather strange that this year’s awards season has neglected another funny turned serious moment, but then again, this year’s awards season has been controversial generally.

Uncut Gems is a throwback movie, following Jewish jewellery dealer Howard Ratner, a man with a gambling problem and a couple of money owing problems causing him all manner of grief over a week in 2012.

Directors brothers Benny & Josh Safdie really made their names with 2015’s Good Time starring Robert Pattinson, and this feels like a companion piece, though much larger in its scope. Both brothers co-write this with Ronald Bronstein, and the film has a pace that feels like a noose tightening around your neck.

From the off this film feels like a throwback, the 35 mm film stock used by cinematographer Darius Khondji is superb, giving you the feeling that you’re watching the lost Sidney Lumet movie. And, for all it’s modern trappings — The Weeknd and Kevin Garnett play themselves, people use iPhones and so on, this is an entirely throwback movie. Replace The Weeknd with Sinatra, Darius Khondji with a pre-arrest OJ and Sandler for Al Pacino and this could have been a 70s joint.

The soundtrack by Daniel Lopatin, though being entirely eighties themed, with it’s synth overdub feeling like it’s from a different film, somehow feels perfectly placed at the same time. And this is also to the credit of the Safdie brothers.

To his (and the casting director’s) credit – Adam Sandler is perfectly cast. Howard is an unlikeable guy, and yet you sort of gain a level of affection as his time goes from bad to worse. Sandler leather jacket and goatee looks like it could have been a role that De Niro or Pacino could have done to Oscar acclaim in the 70s but here Sandler brings his own flair for comedy into it – and the film is funny. It’s the kind of funny made up of interactions and asides.

This should be no revelation, not just for anyone who saw Paul Thomas Anderson’s Punch-Drunk Love or the 9/11 drama Reign Over Me, but even in his early stuff Sandler showed an ability to really get into a character – Big Daddy, Mr Deeds, 50 First Dates and even Click all showed that he was more than just screaming things and fart jokes. It makes you believe that the Happy Madison Production machine grew sentient and has forced him into some form of forced labour to do those awful Netflix films.

The film is, in a way, an endurance test as it continues the escalating problems that Howard finds himself in, constantly placing bets when he should quit while he’s ahead, and getting himself into more and more trouble. In fact at times it feels like the film version of a jazz riff, just going more and more until you feel like the intensity has to let up, and then going some more.

A film like this shouldn’t work in the modern-day; it’s too old school, the sort of movies Lumet and Martin Scorsese liked to make when they were coming up with their actors, and yet the film does work, and really should be seen. It’s an ode to old school filmmaking, that “cinema” that Scorsese was going on about in his controversial rantings last year.

Read next:
Okja review - an adventure film that has scope but also heart and warmth

This is clearly a passion project, shown purely by the fact that the Safdie’s sat on this for ten years until financing came and used the interest generated by Good Time to finance this instead of being lured into some kind of blockbuster movie.

While the film doesn’t fully explore some aspects of the plot — the history around the blood diamond is only alluded to here, unfortunately — the film is a strong example of how to make an audience sit on the edge of their seat, watching one man self destruct for 2 hours and 40 minutes. Welcome back to proper movies, Sandman, we missed you.